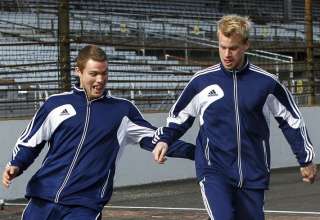 Kyle Bekker, right, in a promo photograph from MLS.

Bekker, the Oakville, Ont. midfielder, Canadian national U-23 player and MVP of the recent MLS combine was Toronto FC’s first selection of the SuperDraft. TFC then traded down, picked up a pile of allocation money, then selected Mississauga’s Welshman at No. 16.

It’s now clear that comments made by TFC President Kevin Payne on Wednesday, that TFC was concerned about Bekker’s size, was all just smoke and mirrors. GMs do that.

“Kyle is a player we know well and we rated him among the top players in the draft going into the combine and felt even more strongly after it,” said Payne in a release issued by TFC. “Our objective was to trade down so we could acquire more assets and we’re happy to accomplish that and still get the player we wanted.

Bekker came into the combine projected as a late first-round pick. But, after he signed a contract with MLS, he became the focal point of the combine — and, by, the beginning of the week, was being pegged as a top-five pick.

On Wednesday, TFC dealt the No. 1 pick to New England for the No. 4 selection and allocation money. New England coveted Andrew Farrell, the centre back out of the University of Louisville. And with the three and four picks in hand, Payne knew his targets would still be in play.

“Trading down” is an understatement. After selecting Bekker, TFC flipped the No. 4 pick to Vancouver in exchange for the No. 10 pick and allocation dough. The No. 10 pick was then dealt to Seattle for more allocation money and the No. 16 pick.

TFC then used that 16 pick (finally) – on another Canadian, Oregon State’s Welshman, who teamed with Bekker at the combine. Welshman scored 10 times for OSU, the second-highest total in the PAC-12 last season.

Both Welshman and Bekker are products of Mississauga’s Sigma FC — so TFC gets two players who have known each other for a long time.

So, TFC went from having the No. 1 and No. 3 picks, to using the No. 3 pick then manipulating the No. 1 pick to pick up allocation money from New England, Vancouver and Seattle. It’s clear that the club feels that it can do more in the marketplace than in the draft. And it’s vital relief for a team that has three Designated Players on the books, all in their 30s.

And, by taking two local players, Payne makes some major steps when it comes to rebuilding the trust between the Reds’ front office and its fans. The growing pains experienced by local players are often forgiven far more easily than when we see foreign players struggle. Two Toronto-area prospects is a major statement from the club.

The ‘Caps used the pick on 18-year-old Gambian Kekuta Manneh. A Gambian U-20 national teamer, the speedy striker scored 10 times in 12 games for the Austin Aztex of the PDL.

With the No. 5 pick, the ‘Caps, which struggled to score in the second half of the season, added another offensive prospect — Erik Hurtado from Santa Clara University. He was the 2012 West Coast Conference Player of the Year. He broke a school record in 2012, with 15 goals on the season. Hurtado is expected to play on the right side.

“We wanted to add pace and excitement in the final third of the field,” Whitecaps coach Martin Rennie said after the draft.

Manneh was well-known to the Caps going into the draft.

“I’ve been to Vancouver two months ago, training with the team. I liked it,” said Manneh.

Rennie confirmed that Manneh spent a week with the team.

“We were well aware of Kekuta before the combine,” said Whitecaps’ president Bob Lenarduzzi. “His performance at the combine confirmed what we knew. We feel he has unlimited potential.”

But it’s clear the Whitecaps want to get Darren Mattocks some help up top — and these picks automatically put pressure on Designated Player Kenny Miller, the Scottish striker who underwhelmed after arriving in MLS. The Whitecaps have armed themselves with some offensive options, even though Kekuta, at 18, has to be seen as a project player.

The Montreal Impact, who on Wednesday stated to media that it would look at trading up for a shot at Bekker, ended up taking University of New Mexico midfielder Blake Smith.

He had the second-most assists in the NCAA last year, with 13. He’s left footed and he can play on the wing.

With the 18th pick, the Impact added yet another midfielder, Fernando Monge, from UCLA. Monge was a first-team PAC-12 selection in 2012, and scored five times this season.

In the second round, the Los Angeles Galaxy selected Kofi Opare, a Canada-born centre back who has played for the U.S. U-20 program.

Of the three Canadian MLS teams, the Impact were the only one to hold second-round picks. Paolo Del Piccolo was the Impact’s first pick of the second round. Delpiccolo is on trial with Frankfurt of the Bundesliga — and is Louisville’s all time assist leader. And with the 32nd overall pick, the Impact took the first keeper of the draft, Brad Stuver. Stuver had nine shutouts with Cleveland State. The Impact has Troy Perkins as its No. 1 and Evan Bush in the wings, so it’s a pick that few would have predicted.

Canadian Drew Beckie, a former national U23, University of Denver product and ex-Ottawa Fury midfielder, went in the second round of the draft. He will have a chance to play his way onto the Columbus Crew, after being a late invite to the MLS Combine.