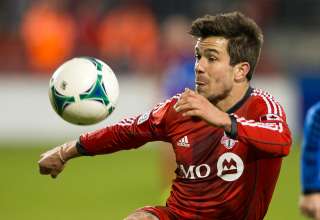 Sloppiness in the first two minutes and controversy in the last two minutes bookended 86 minutes of quality soccer from Toronto FC, leaving the team upset that it only got one point on Friday night following its 1-1 draw with the New England Revolution at BMO Field.

For the second time in as many games, the Reds found themselves in an early hole, this time allowing Diego Fagundez a gift of a goal in just the second minute. New England midfielder Kelyn Rowe did the majority of the work in taking the ball up the right side and easily slicing through several Toronto defenders.

Rowe got a shot of his own that was stopped, he got his own rebound and then passed to a completely-unmarked Fagundez on the left side. Fagundez missed at least three gimme chances in the Revolution’s last meeting with TFC (a 1-0 Reds win on August 4) but not even he could miss this one, as he popped it into the open net to give his team an early advantage.

“We’re slow out of the box, aren’t we?” TFC head coach Ryan Nelsen said. “We’re getting close to being a 90-minute team but it wasn’t good enough. The guys knew it. What the reaction [was] after that was probably key for me….We probably just needed a wee bit and we would’ve won the game.”

That “wee bit” may have in fact come off the head of Steven Caldwell, was it not for a questionable referee’s call. With the score tied in the 88th minute, a Bobby Convey free kick found its way to Caldwell in the box. The Scotsman split two defenders and headed the apparent go-ahead goal into the right side of the net, yet just instants before head met ball, referee Fotis Bazakos had whistled Caldwell for a foul.

A foul for what, exactly? As Nelsen said, “it’s hard to find one, isn’t it?” Replays showed that Caldwell’s arm may have made slight contact with Jose Goncalves as the players were jostling for position, but at worst it was the type of incidental contact that usually goes unnoticed. This time, to the Reds’ chagrin, the referee decided to make a call.

“I think it was the wrong decision by the ref. It certainly wasn’t a foul,” Caldwell said. “It was a good ball by Bob… and I scored. I was in the area first and held my ground, and it was very disappointing that I didn’t get a goal.

“I think he knew he made the wrong decision. We’re all human, we all make mistakes, it’s just that it was such a tight game.”

Nelsen actually said that Bazakos had admitted his fault to Caldwell after the match, though Caldwell said this wasn’t the case. Whatever the situation, the goal still wasn’t counting and TFC found itself ruing its early mistakes.

“It was just really sloppy,” Caldwell said of the Revolution’s goal. “We gave the ball away sloppily, their movement kind of caught us off guard and disrupted our shape. We were asleep there and it was a very poor goal.”

Fagundez almost scored again a few minutes later, curling a nice shot from just outside towards the right side of net that was knocked away in impressive fashion by goalkeeper Joe Bendik. After that chance, Toronto controlled much of the first half, stringing together passes and yet sputtering once it came time to make the final touch.

Two minutes into the first half stoppage time, however, the Reds finally broke through. A long free kick near midfield from Richard Eckersley went into the box and bounced around between a few players on both sides before Doneil Henry managed to corral the ball long enough for a quick pass to Andrew Wiedeman. The striker turned and scored, leveling the match and earning his second goal of the season.

“It was a bit of a pinball goal. It wasn’t the prettiest but it went in the net,” Wiedeman said. “We work on that play a lot. The first guy going up, he’s doing the selfless job and tonight that was [Caldwell] out there battling. Usually they’re not the one that’s going to get the ball but explode it up so high that even the defender gets on it, they’re not getting much so it’s falling for a second chance. That’s where the opportunities are going to come. I think mine was probably the fifth or sixth chance.”

Wiedeman’s goal was actually Toronto’s only shot on goal in the entire match (compared to two for the Revolution), though TFC outshot New England by an 11-7 margin overall. Though the finishing wasn’t there, the Reds did generate some good pressure, with Robert Earnshaw and Reggie Lambe combining on a few dangerous plays throughout the match.

If nothing else, even the one goal was a moral victory for the Reds given that they entered the match with the second-lowest goal total (22) in the league, while the Revolution had conceded a league-low 24 scores.

Earnshaw was back in the Starting XI in place of Jeremy Brockie, who is back in Australia following the expiration of his loan deal. The lineup was otherwise the same as it was in last Saturday’s 1-1 draw with DC United. Jonathan Osorio left that game early after suffering an ankle injury, but he was back on Friday and played the full 90 minutes.

Maximiliano Urruti made his BMO Field debut, entering the game as Earnshaw’s substitute in the 78th minute. The Argentine striker has come off the bench in two of his three matches as a member of Toronto FC, though Nelsen said that since Urruti “has been out of action for a number of weeks,” it may be a while before the 22-year-old cracks the Starting XI.