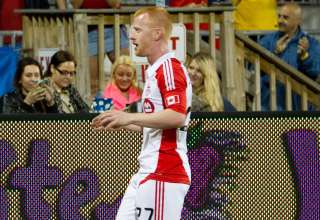 In the cold and rain of Columbus, it finally came to an end.

It wasn’t quick. It wasn’t merciful. With a 2-1 loss to Columbus on the final day of MLS regular-season play, the Reds finished their last-place season with a 14-game winless streak in MLS play. Aron Winter began the season coaching the team to nine straight losses; Paul Mariner finished the season with no wins over more than three months.

Columbus’s opening goal exposed Toronto FC’s defence. Federico Higuain, the dynamic Designated Player who did all he could to help Columbus push for the playoffs but fell just short of his goal, still had enough energy on this final day of the season to split defenders Adrian Cann and Jeremy Hall before slotting cooly home.

Andrew Wiedeman, the token TFC received in the dumping of DP Julian de Guzman to FC Dallas, got behind the Columbus defence and stroked a shot inside the post to give TFC an equalizer before halftime.

But Higuain converted a second-half penalty, ensuring the Reds would finish the season with just 23 points from 34 matches.

Now, TFC is left with a situation that’s worse than an expansion team. It would be better if Maple Leaf Sports and Entertainment could fold this club and reapply to enter MLS as an expansion side in 2013. The new Toronto team would still get the top draft pick, but would be saddled with no contracts. It could start fresh with an expansion draft, and all of the bad decisions made by management could be erased from the books.

But, no, TFC will go into the season knowing it has the No. 1 pick in the 2013 draft, but has already traded away 2014’s first-round pick as part of the deal to bring Eric Hassli to Toronto. Hassli had three goals in seven appearances, a healthy enough return, but the big French striker is a consistent worry with injury issues.

And, after the 2013 top pick, the club still has DP obligations, and also has to continue to pay Richard Eckersley $390,000 — more than a DP cap hit — to offer a service at right back/centre back that TFC could have found in an out-of-contract NASL journeyman.

With the team finishing out of the playoffs for six seasons in a row, and being almost a full roster away from being a contender — not four or five or six players away — it’s hard to attract the better calibre of North American player that every MLS club needs to add depth to the roster. In covering the NASL beat, I have heard more than one player whisper to me that he’d love a chance to play in MLS, but then adds “except Toronto” to his statement.

It’s like watching someone trying to fight a fire with gasoline. The more TFC addresses its roster with Band-Aid solutions like Eckersley and Hassli, the more hamstrung the club becomes. And the more hamstrung it becomes, the club is seen as a less and less desirable places for players and coaches to call home. In MLS, every management misstep you make is compounded.

And, maybe worst of all — as the Columbus game has shown us, and the last two months of home games have shown us, too — is that TFC is not just a bad team, but a boring team to watch. And, with those factors all coming together, TFC’s end to the season isn’t stirring anger in the supporters anymore, it has created the most difficult emotional state for any club to overcome — indifference.