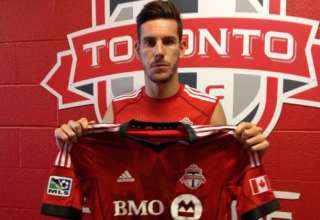 As tough as things have been for the Reds this season, at least they’re not D.C. United. In a match that had the look (and often the feel) of a glorified reserve-league game, Toronto FC snapped an eight-game winless drought with a 4-1 blowout over the hapless Washington side.

It was a rare easy afternoon for the Reds, who earned their fifth win of the season. The four goals tied a club high, marking the fourth time in TFC history that the Reds had reached the four-goal barrier.

“They were really expressing themselves, looking to take guys on, wanted to get numbers into the box and we did that today,” TFC interim head coach Jim Brennan said. “We had some great service for the strikers and we had some great finishes.”

Technically, the Reds didn’t even beat THE United side who have struggled to just 15 points in 30 games. Of the 11 men who have played the most minutes for DC this season, only two were in Saturday’s Starting XI, as the Red-and-Blacks were clearly saving their regulars for Tuesday’s U.S. Open Cup final against Real Salt Lake.

The result was that TFC got to face players who weren’t even good enough to crack the lineup of a last-place squad, though given how rarely the Reds win, they were hardly complaining about facing second-choice opponents.

“A win’s a win, regardless of who you’re playing against. It’s always good to get a win, no matter who they end up bringing,” Brennan said.

Despite the skeleton-crew lineup, United still got out to the early lead on a very well-placed 25-yard strike from Jared Jeffrey in the 15th minute. Just before the 15,879 fans at BMO Field could mount dread that their side could actually lose to this makeshift D.C. squad, however, Darel Russell equalized in the 25th minute with a tremendous goal of his own.

Standing on the right side of the box in anticipation of a cross, Russell had to react quickly after the pass came to him at an odd angle after deflecting off a United defender. Russell corralled the ball with his back to the goal, bounced it up to himself and performed a halfways-bicycle kick motion to put the ball inside the left post.

“That’s just from years of playing, you just know where the goal is and hopefully the defenders don’t want to push on you,” Russell said. “When you’re in the box people don’t want to do too much because they don’t want to give away the penalty, so you have probably more time in the box than [outside]… Luckily for me, I had enough time to make sure I turned and connected well with the ball.”

The game settled into a lull of both teams kicking the ball around without much direction or pattern until the 67th minute, when the Reds just began to overwhelm their opponents. Forward Bright Dike was wide open in front of the United goal and in perfect position to knock in a Mark Bloom cross, giving Dike his first goal in a TFC jersey.

Four minutes later, Toronto got a gift in the form of an own goal from United defender Conor Shanosky, who deflected an Alvaro Rey attempt past his own goalkeeper.

Rey got on the board himself in the 87th minute when he took the ball into the box and simply held it until three (!) defenders over-committed. Rey then calmly rolled the ball into the left side of the net for an impressive capper to his best game as a member of Toronto FC.

“We said at halftime that this game was here for the taking. If you continue the way you [played] in that first half, there’s goals here and we should be able to finish this game comfortably,” Brennan said.

While a late-September game between the Eastern Conference’s two worst teams was meaningless in the standings, it was nevertheless an important result for several TFC players who are fighting to ensure a place in the team’s future. Rey and Dike breaking through for their first MLS goals was a good step for the two newcomers, and while Russell’s spot is a lot more tenuous for next season, his three goals are the third-most of any Red this season.

One player who doesn’t seem long for the Toronto jersey is Richard Eckersley, who was benched despite Bloom’s rough performance in his previous game. Nelsen spoke earlier this week about how the Reds can’t afford to spend big money on fullbacks given their limited salary cap, singling out Eckersley despite the fact that Nelsen praised his actual play on the pitch. With the writing on the wall, it seems as if TFC will give its younger defenders time in Eckersley’s place in the club’s remaining three games.