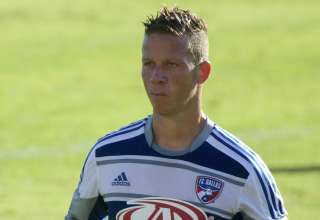 For the second straight game, Darel Russell was the key figure behind the final goal of a 2-2 Toronto FC draw. This week, however, Russell exchanged goat horns for what may be an MLS Goal of the Week award by scoring a spectacular equalizer in the 90th minute to steal a point for his side against first-place FC Dallas.

After lying dormant for much of the match, TFC’s attack suddenly roared to life in the closing minutes, putting the Hoops on their back heels. Late substitute Justin Braun cut the lead to 2-1 in the 85th minute and then was the catalyst five minutes later when he sent a cross over to Russell on the right side. Standing just outside the box, Russell launched a right-footed shot that soared through the air and banked into the left side of the net, past diving FCD goalkeeper Raul Fernandez.

It was Russell’s first goal with TFC and his first goal of any sort since Sept. 13, 2011, when he was still a member of Preston North End. It was an outstanding strike for anyone, let alone a player not necessarily known for his offensive prowess and one who is still getting used to a more defensive-minded role on Toronto’s back line.

“There was one thought in my mind when I saw it come over and that was to control it and score a goal so late in the game,” Russell said. “[Playing] right back for me is a learning experience, I’ve always been an attacking midfielder so it’s a question of picking when and where to move forward… It’s just finding that balance and knowing the players you play with a little bit better.”

It’s a balance that Russell has yet to fully master. Goal aside, he did not have a strong game going up against the Hoops’ high-powered attack. And, of course, Russell is just a week removed from a failed clearance attempt that led to TFC blowing a 2-1 stoppage time lead over the Los Angeles Galaxy.

Still, Russell’s goal will give him some breathing room against calls that he perhaps isn’t ready for regular time in the Reds’ starting XI.

“You’re always going to have critics and that doesn’t worry me,” Russell said. “They’re the guys I have to impress the most because they’re the ones that will test me mentally and put that pressure on to keep improving. I like that. They’re entitled to their opinions and I relish them and try to prove them wrong.”

Russell’s up-and-down performance was symbolic of Toronto FC as a whole in the match. The Reds didn’t register a single shot until the 52nd minute and fell behind 2-0 thanks to two sloppy plays. While defending a free kick, the defensive wall failed to mark Dallas midfielder Andrew Jacobson, who collected the rebound when it bounced off Kenny Copper’s head. Jacobson then calmly buried the goal that gave FCD the lead.

In the 59th minute, John Bostock gave the ball away in his own end to Hoops midfielder Michel. The ball was passed to Jackson, who sent a terrific cross to striker Blas Perez on the left side that was promptly converted. TFC defenders seemed to stand still on Perez’s goal, believing the forward to be offside, yet no call came and the Reds were suddenly staring at a two-goal deficit.

While Perez’s goal seemed at the time like the nail in the coffin, TFC had looked better in the second half after Luis Silva was inserted into the game at halftime and Braun came on in the 72nd minute to spark a lacklustre midfield. The Reds kept building momentum and were eventually able to overtake a Hoops side that itself didn’t look overly impressive.

“We need to take the game to teams here,” said defender Darren O’Dea. “We were just waiting, going through the motions…I think both teams were at three-quarters pace and there was no tempo to it. We needed someone to take hold of the game and go and win it.”

It was a rare comeback for the Reds, who so usually are the ones who are conceding goals and giving away points in the closing minutes. While TFC head coach Ryan Nelsen was very happy with the finish, he couldn’t help but wonder what might have been both on Saturday and during the season as a whole.

“[I’m] frustrated in the fact that it took us adversity to get the character out and get the personality out,” Nelsen said. “We’ve got to show that from the start and show that for 90 minutes.”

“If you’d asked me that six weeks ago I could be really happy sitting here with five points [in five games] given the schedule and who we’re playing. But I feel for the guys, we’re disappointed because [against] L.A. and I think here was an opportunity and opportunities don’t come around very often. We’re very close to being a pretty good team…As you saw in that second half, we can compete with anybody.”

It seemed as if the game had been 100 minutes long, Toronto would’ve gained a comfortable win given how it was pressing and Dallas was falling back. TFC possibly could’ve also found a game-winner had it received some help from referee Ismail Elfath — both a Dallas handball and a tackle on O’Dea within the box weren’t called in the last five minutes. A total of seven yellow cards were handed out during the match, another sign that both the Reds and Hoops weren’t at their crispest.

TFC made two changes to their lineup from the previous week, as Gale Agobossoumonde started, filling in at centre back for an ailing Danny Califf and Toronto-area native Jonathan Osorio started in place of an injured Terry Dunfield. Fullback Richard Eckersley’s fitness may be up in the air for next week as he suffered what Nelsen thought was “a slight twinge in his hamstring” and had to be taken off in stoppage time.