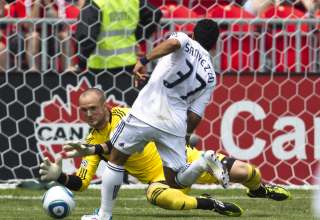 Make it three for Toronto FC.

The Reds recorded a 2-1 win over Vancouver Whitecaps FC Saturday in the second leg of the Nutrilite Canadian Championship final, giving TFC a 3-2 aggregate victory in the tournament and their third consecutive Voyageurs Cup.

Toronto is now unbeaten in its last nine NCC games (6-0-3), a streak that began with the famous “Miracle In Montreal” 6-1 win over the Montreal Impact in the final match of the 2009 tournament.

Saturday’s match was a wild affair that, as is custom for the NCC, featured some controversy, but it was a game TFC could and probably should have won by a wider margin. The Reds outshot Vancouver by a 12-3 margin, but were stymied by a crossbar, two goalmouth clearances (at least one of which was very questionable) and some poor finishing before finally breaking out in the second half.

Down 1-0 through 49 minutes, the Reds’ constant attack finally delivered. Striker Joao Plata was fouled in the box by Jonathan Leathers and was awarded a penalty kick. The diminutive forward lined up to take the kick himself but was blocked by goalkeeper Joe Cannon.

Just when it looked like TFC had come up short again, however, the referee ordered a re-kick since Cannon was judged to have come off the line too early. Plata made the most of his second chance, burying the shot and equalizing the score.

Ten minutes later, Toronto took the lead for good. It was Plata again at the heart of the scoring chance, beating Leathers again on the left side and sending a cross in front of the net. The ball bounced to the right side and found Mikael Yourassowsky in position to knock home the Cup-winning strike.

The goal was Yourassowsky’s first in a TFC jersey, but the midfielder was more interested in what the title meant for his side rather than reflecting on his personal achievement.

“You want the team to win. if the team is winning, that’s the most important thing for me,” Yourassowsky said. “It’s not so much who is scoring or who is making the production. I think we have a good group, we have some good qualities in the group and I think with a little bit more confidence we can make really good things happen.”

The Whitecaps pressed for the equalizer in the game’s closing minutes, with star forward Camilo Sanvezzo and Eric Hassli leading the way with a couple of good chances each, particularly an 86th minute cross from Camilo to a wide-open Hassli on the right side that resulted in an off-target shot from Hassli.

This late pressure aside, the ‘Caps were clearly let down by their performance.

Same old, same old, for Whitecaps
“That makes it frustrating, we were so close,” said vice-captain Terry Dunfield. “Unfortunately, that second half probably sums our season up — we’re almost there, we compete, we put ourselves in a great chance to win the game and unfortunately we weren’t able to pull through.”

Dunfield was one of five Whitecaps regulars (along with Hassli, Camilo, Leathers and Joe Cannon) who were back in the Starting XI after being held out of the lineup in Wednesday’s 1-0 loss to Toronto in league play. The Whitecaps were clearly looking to the NCC final as the more important of their two dates with Toronto FC and wanted to give those starters some rest, but the tactic didn’t seem to work.

“I was disappointed. The guys we thought would be fresh, I didn’t think they were,” said Whitecaps head coach Tom Soehn. “The reasons for that I’m not sure. Ultimately we had a good enough team to win and we have to show up in games like today.”

Camilo was Vancouver’s best player on the day and the striker was responsible for the Whitecaps’ early lead. Camilo was fouled outside the box by Ty Harden in the 21st minute and was awarded a free kick. Alain Rochat initially stood over the ball but it was Camilo who came in to actually take the shot, and the forward launched a brilliant, unstoppable shot into the upper-right corner of the net.

That goal, however, seemed to only wake Toronto FC up. The Reds swarmed the Vancouver side of the field for the remainder of the half and were just flat-out unlucky to not put at least one ball into the back of the net. During one incredible sequence , in the 26th minute, Julian de Guzman banked a shot off the bar, the rebound was taken by Javier Martina and stopped only by a goal mouth clearance by a defender and then striker Nick Soolsma’s final shot was stopped by a leaping save from Cannon.

That save was one of eight made by Cannon in the match, but the Whitecaps ‘keeper did not have one of his stronger efforts. He had trouble collecting a few shots and was almost caught out of his net on the most controversial play of the match.

In the 41st minute, Cannon came out beyond the goal box to cut off a downfield pass before Martina could reach the ball. Cannon’s attempt bounced right to Martina, however, and the forward knocked a bouncing attempt towards the wide-open net. Jay DeMerit barely got there in time to clear the ball before (as the referee and linesman saw it) it crossed the line. TV replays showed at least part of the ball was over the line and had Toronto FC gone on to lose, the play would have entered into Voyageurs Cup lore.

The Whitecaps know a thing or two (or three) about hard-luck NCC results. In 2009, Vancouver saw a seemingly insurmountable goals-scored advantage erased by TFC’s Miracle In Montreal. Last year, the Whitecaps suffered the frustration of four draws in four matches and again finished as runners-up.

This year, the ‘Caps and their supporters will no doubt point to May 25 as their latest case of bad luck. That was the date when this second leg was originally played at BMO Field, but that match was abandoned after 60 minutes due to a waterlogged pitch and lightning. Vancouver held a 1-0 edge when play was called.

Lost in the weather stoppage, however, was the fact that TFC had been the overall better team on May 25 and left no doubts on Saturday about who deserved to win the Cup. Soehn admitted his team showed “a bit of panic” in the second half and said the Whitecaps still needed to build a winning mentality, particularly in a season-defining match such as the national championship final.

“In big games, there are certain times you have to be focused — starting out a half, ending a half, right after a goal or right after they score,” Soehn said. We still have a ways to go to make sure we’re stronger mentally and a better team through that.

“Winning is a habit. You’ve got to get one to build another one…..One of our major goals was winning the Cup and we came out of here empty-handed.”

Indeed, with the Whitecaps currently at the bottom of the league table, the Canadian Championship would have been the highlight of Vancouver’s first season in Major League Soccer. Cannon made no bones about the fact that for several Whitecaps players, their main focus is now on playing well enough to be on the roster in 2012.

“I’ve been in this situation before, and I think what happens now is you’ve got to play for your job, and that’s it,” Cannon said. “You’ve got to play good enough so this organization is going to want you next year, and that goes for all of us, from the oldest guy, me, to the youngest guy, Omar [Salgado].

“As far as the playoffs are concerned, I don’t think any of us can think about that right now. I think we all have to think about our jobs, and that means we have to start winning if we’re going to stay around, and that starts Wednesday [against Columbus].”

As for Toronto FC, between the NCC title, Wednesday’s win over Vancouver and the signings of two Designated Players (Torsten Frings and Danny Koevermans), this has been one of the best four-day stretches in recent memory for the club. The success is even more impressive given the number of key players missing with injuries, which gives coach Aron Winter hope that his side can be dangerous once he has his full roster available.

“In three weeks, almost all our injured players will be fit then we’ll have a good roster to build, get more points and do everything to get into the playoffs,” Winter said.

Two more players, however, were added to this injury list on Saturday. Maicon Santos returned to the lineup after missing Wednesday’s game with a strained hamstring but had to leave after just 19 minutes due to a possible re-aggravation of the same injury. In the 56th minute, Ty Harden had to leave due to a leg injury and was seen after the game celebrating his team’s Cup victory on crutches.

On the plus side for the Reds, Tony Tchani came on as Harden’s substitute and showed no signs of the ankle injury that had kept him out of action since June 11. Julian de Guzman also made his return, playing his first game since suffering a calf injury during the Gold Cup.

The win was particularly sweet for de Guzman, both since he was physically able to play and because the Voyageurs Cup helped ease the pain of Canada’s disappointing early exit from the Gold Cup.

“I was really happy to be able to play in this game. It was a very special game to myself and for all of the guys,” de Guzman said. “Winning this game was something we wanted to achieve this season.”

Toronto FC now advance to face Nicaragua’s Real Esteli FC in the preliminary round of the CONCACAF Champions League. The first leg of that tie will be held at BMO Field July 27, with the second leg played in Nicaragua between August 2-4. TFC was eliminated in the group stage (with a 2-2-2 record) in last year’s Champions League and was knocked out in the preliminary stage by the Puerto Rico Islanders in 2009.