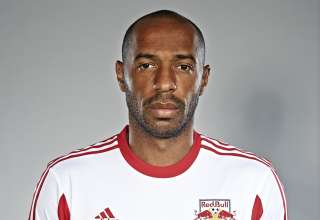 There are two things that strikers must do (other than score, of course).

They must command fear from the opposition. They must force opposing defences to respect them.

If opposing defenders and holding midfielders fear the strikers, they won’t commit forward as much; they hang back to try and mitigate counterattacks. And, that opens up space for other teammates; if the strikers are marked, then there will be openings that allow a midfielder to make a run.

But it’s clear that Toronto FC doesn’t have a healthy striker who can command that fear and/or respect. It’s evident on how opposing teams can crowd out TFC in the final third of the pitch. The strikers don’t pull defenders out of position. And, TFC, try as hard as it might, can’t create any real threats in the final third.

Case in point: Saturday’s 2-0 loss at the New York Red Bulls. The result now leaves TFC with 23 points with five games left to play. With Houston’s win over Philadelphia Saturday night, the Reds are officially (as in, mathematically) eliminated from playoff contention. If somehow lightning struck five times in a row, and the Reds won their last five, they’d get to 38 points. The Philadelphia Union, which held fifth place at the time of this article, have 39 points.

So, summer isn’t officially over, and TFC is done. A seventh playoff-less season is guaranteed.

For the first half an hour at Red Bull Arena, TFC looked good. (“Good,” as in how a TFC fan with low expectations coming in would rate “good.”) As in, the Reds had good possession; they spent a lot of time in the New York half. Right back Mark Bloom, on loan from the NASL spring champs Atlanta Silverbacks, looked dangerous, making several good forays down the wing. And Spaniard Alvaro Rey also made some good runs down the right.

But, for all the possession, all the times Bloom and/or Rey were able to get in deep positions, the Reds couldn’t force Red Bulls keeper Luis Robles into a tough save. The Reds had two early chances of note; first, Bloom sent in a cross for Jonathan Osorio, but a last-ditch attempt from New York fullback Kosuke Kimura to cut it off was successful.

TFC fans were also disappointed to see New York defender Jamison Olave head a cross from Alvaro Rey over the bar, when it looked like it would find Reds’ striker Andrew Wiedeman.

But, the starting strikers of Wiedeman and Braun weren’t able to create space. And, as the game went on, it became clear that the Reds were playing as well as they possibly could — and weren’t creating any real threats. It’s like being in a fight, the opponent taking his best shot, and you realizing that it didn’t hurt at all.

New York then benefited from a pair of mistakes, one from each TFC fullback, at the half-hour mark. Midfielder Dax McCarty made a brave run to the right side of the box, where it should have been picked up by Reds’ left back Ashtone Morgan. But McCarty was left alone to fire a low cross across the face of goal. And that’s where the second mistake was made; Bloom lost track of his mark — gulp, Thierry Henry. And Henry was able to side foot the ball home without much trouble at all.

After a half hour, all of TFC’s hard work had been done in by not only the errors in the back, but the team’s inability to translate possession into meaningful chances. With Designated Player Danny Koevermans still shelved because of injury — as he has been almost all of the season — the Reds have no player up front who can, by reputation, keep defenders honest.

Really, TFC only created one chance of note; and that was a drive from sub Bright Dike that forced Robles into a decent chance.

An 80th minute goal from Fabian Espindola, a looping header after a goalmouth scramble that went over the heads and arms of TFC keeper Joe Bendik and the body of centre back Gale Agbossoumonde, gave the Red Bulls the insurance it needed. But, judging by the amount of threat the Reds showed when they got into the box, Henry’s goal was always going to be all that the home team needed to win.