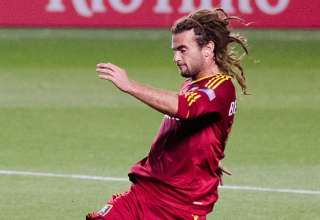 Toronto FC came into Rio Tinto Stadium looking for its first points of the season in league play, and left empty-handed. That’s not surprising as it entered the match 0-6-0, and its opponent was battling for the top spot in the Western Conference.

However, TFC showed a lot of moxie, pushing the home team to the brink before it managed a miraculous last-minute stoppage-time goal that delighted the home crowd, and left the visitors devastated as Real Salt Lake took a 3-2 decision.

“For 90 minutes we did what we had to do, but the game goes on longer than that,” said a dejected Julian de Guzman after the match. “I think it was a lack of a little bit of intelligence from our part.”

The goal came from Jonny Steele who was the beneficiary of a tantalizing setup from teammate Kyle Beckerman, who laid the ball off in perfect position for the Irishman’s strike. Javier Morales started the play with a nifty rainbow pass to himself over the head of a defender before delivering the fateful cross into the top half of the penalty area for Beckerman.

Prior to that it appeared that the Reds were able to answer everything that the favored RSL squad threw its way. RSL had opened scoring in just the seventh minute after a bit of ping pong on a corner that Jamison Olave got his head to, and Beckerman finally put away for the 1-0 lead.

However, TFC answered with a couple of dangerous chances in the half, most of them spurred on by Eric Avila who had a fantastic night, using his speed and skill to carve up the right side of the RSL defence.

“He definitely brought a spark up front for us. In the first half we had three clear opportunities to at least get one goal,” said de Guzman. “Our objective in the first half was to come out with no goals against and we were down already 1-0 just from a set piece.”

However, after Torsten Frings missed a penalty, Avila would make his mark early in the second half. He received a nice flick on from Ryan Johnson and sidestepped a lunging move by Olave before picking out his spot in the upper right of the net with a curling shot to level the match at a goal-apiece.

Unfortunately an own goal created when Richard Eckersley got his knee on the ball while trying to defend a cross to Alvaro Saborio put RSL ahead again a few minutes later.

For a while it appeared that Toronto had run out of gas, as it spent long stretches chasing, but the Reds dug deep and found yet another equalizer in the 77th minute – this one from Doneil Henry, scoring his first career goal off of a well-placed corner kick.

“It felt great but you know what at the end we still lost,” said Henry, of his goal. “It doesn’t really mean much if we couldn’t steal the game or at least get a point out of it.”

Beckerman gave a lot of praise to his opponent after the match. “It was really tough. It was annoying. We just wanted them to go away, but they just wouldn’t. And credit to them. They fought till the end, and they made us earn it.”

For TFC, it’ll have to regroup as it takes on Montreal on Wednesday in the Amway Canadian Championship, a battle between struggling Canadian squads.

“We have the Canadian rivalry coming up on Wednesday and I think it’s a perfect time to get back on our heels and start getting some points,” said Henry.

“They’re a good team, but the problem they had is that Champions League killed them. It’s a very tough thing to do in a salary-cap league even with three designated players. It’s extremely tough to travel down to Mexico and then up to Montreal. It’s difficult. You are so focused on this championship that you are so close to winning, and then all the sudden you’ve got to refocus on the league and you’re 10 points behind.”