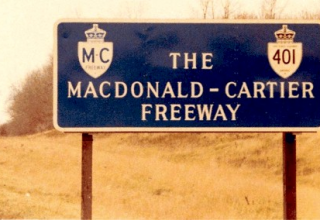 Both Montreal and Toronto FC beat their Gotham opponents Sunday in the first legs of their Eastern Conference semifinals. If they can preserve their leads in next weekend’s second legs, then a Canadian team will play in MLS Cup.

Montreal will try and protect a 1-0 lead after Matteo Mancosu’s brilliant volley gave the Impact the win over the New York Red Bulls at Stade Saputo. TFC will go to Yankee Stadium 2-0 to the good after late goals from Jozy Altidore and Canadian Tosaint Ricketts broke open what was a chippy game at BMO Field.

That TFC-NYCFC game will give the MLS Disciplinary Committee a lot to think about. In the 20th minute, NYCFC’s 23-goal man, David Villa, kicked out at TFC’s Armando Cooper, right in front of referee Silviu Petrescu. The Canadian ref decided to not even blow the whistle, even though Villa clearly kicked Cooper in the back of the leg — a clear red-card infraction. Will the DisCo suspend Villa for the second leg based on the video evidence? All eyes will be on New York to see what will happen to be New York-based Designated Player.

As well, at the end of the game, a group of NYCFC players clearly tried to goad Altidore, on a yellow from TFC’s playoff win over Philadelphia, into a card as the final whistle went. He was confronted by a couple of NYCFC players, led by Andoni Iraola. Had Altidore got a yellow, he’d have been suspended for the second leg at Yankee Stadium.

(Again, this incident offered only more proof why the two-yellows-over-a-series-of-games suspension system needs to go).

TFC got the lead in the 84th; the ball was launched into the box and fell to Ricketts, who whiffed on the chance, but the ball spilled out to Alltidore, who drove the ball into the roof of the net.

NYCFC would have been OK to escape BMO Field with a 1-0 deficit, but Ricketts’s perseverance doubled the lead in injury time. NYCFC keeper Eirik Johansen made a great diving stop to deny Ricketts’s initial shot. But, while laying on his back, Ricketts got his foot to the rebound and pushed it over the goal line.

Montreal got its victory earlier in the day. Mancosu, who scored twice in the playoff win over D.C. United, blew by Red Bulls defender Aurelien Collin, took the ball on a bounce and blew a volley just underneath the bar.

Mancosu’s second-half goal was part of a Jekyll-and-Hyde game; neither team got a shot on goal in the first half. But, in the second half, there were plenty of chances. Former Impact midfielder, Felipe, struck the bar with his free kick. And, in the dying seconds, the Red Bulls had a wonderful chance to tie the game. Bradley Wright-Phillips played Mike Grella into the box. But, inexplicably, instead of firing a shot towards goal, he played a poor square ball towards Sacha Kljestan. The slow pass gave Impact keeper Evan Bush and defender Laurent Ciman time to scramble over and block the shot.

“We’re going to New York with an advantage,” Mancosu was quoted in a release issued by the Impact. “Our work isn’t done yet. We loved playing this game in front of our fans, which give us such great emotions and help us so much. We’re really pleased with this first-leg win.”

Bush then made a great save on Omer Damari, and then Phillips, scorer of 24 goals this season, blasted the rebound wide when it would have been easier to score.

Damari won’t figure in the second leg, as his stupid two-footed challenge on Calum Mallace right at the end of the game got him sent off — and suspended.

You know those execs at the American networks would be oh, so, so happy to see a Montreal-Toronto Eastern Conference Final. But, considering how MLS has been plagued by plunging TV ratings in Canada (see issue 10 of Plastic Pitch), an Impact-Reds playoff encounter could bring a bright finish to what’s been a bleak year.