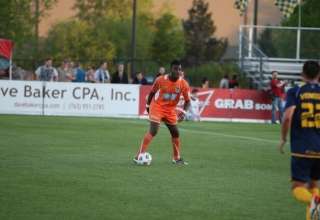 The Boss, in Carolina during the 2012 NASL season.

If there is anything that shows the flaws in the relationship between NASL and MLS, it’s the lottery for former United States U-20 striker Gale “The Boss” Agbossoumonde.

Now out of his contract with Traffic, the massive Brazilian sports marketing firm that represents NASL as its agent, owns the Fort Lauderdale Strikers and has interests in the Carolina RailHawks and Atlanta Silverbacks, the Boss struck a deal with MLS. Toronto FC won his rights in a lottery held Thursday morning.

The Boss is a raw prospect, and he took his lumps last season while on loan to the RailHawks. He was a regular on the defence that tied for the worst goals-against mark in the league. In an 8-0 loss to San Antonio, The Boss endured arguably the worst game of any CB in NASL in 2012. And the book on The Boss is that while he has plenty of raw talent — and worked with Toronto FC’s Thomas Rongen while with the U.S. U-20s — he makes a lot of mental and positioning errors. He needs to be more assertive as a centre back.

As anyone who covers NASL will tell you, The Boss is a project player. He has the tools, but considering that he struggled at the Division-2 level last season, he will need lots of time before he’s ready for an MLS match.

But, the reason that there was a six-team lottery for a defender who wouldn’t be close to the NASL Best XI came about because, well, he was available and no longer under contract.

While we hear rumblings of USL and MLS working out some sort of player-development/ affiliation deal, the relations between MLS and NASL are not what they should be. NASL players have had mixed results when they’ve moved up to MLS (2011 NASL MVP Etienne Barbara is in limbo after being cut by the Whitecaps after an unproductive 2012 MLS season; but Matt Watson was very good in a Whitecaps shirt), and that’s no different than players moving up from NCAA or players coming in from lower European divisions. You win some, you lose some.

But, with MLS refusing to buy in on in-contract players, they miss out on the real elite players in the league. There’s an old stereotype that every player in NASL or USL is on a one-year deal. That’s getting less and less true by the year, as more and more teams protect their assets. FC Edmonton re-upped the team options on pretty well all of its core players.

And this is the crux of the argument. FCE has stated over and over it has no issue in its players moving up, as long as its interests are protected (i.e. transfer fees). FC Edmonton has one of the best centre backs, if not THE best centre back in NASL. Paul Hamilton is 24. And he’s Canadian. He was on NASL’s year-end Best XI. Unlike Boss, he could push for a position in Toronto FC’s starting XI. But Hamilton would cost MLS and TFC something — so he remains in Division 2.

That’s the real shame here. The best defensive option in Division-2 soccer, the guy who could most help a team like TFC, a Canadian player to boot, won’t get that chance.