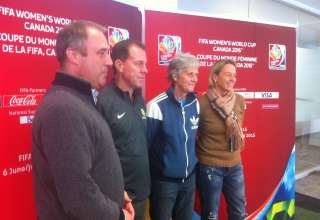 The days following the Women’s World Cup draw has seen the coaches and managers of the 23 visiting teams travelling throughout Canada and checking out the venues.

Managers from Sweden, Switzerlands, the Netherlands and Australia were at snow-covered Commonwealth Stadium in Edmonton on Tuesday. Organizers were able to plow out a strip of turf from underneath a heavy blanket of the white stuff so the coaches could actually inspect the playing surface.

All four of the managers said they are making preparations for a World Cup played entirely on turf. The Dutch played all of their home qualifiers on turf and will play all upcoming friendlies on turf, said coach Roger Reijners.

But Swiss coach Martina Voss-Tecklenburg said that the venue that will host the World Cup final simply isn’t good enough. She said that Commonwealth’s turf is just fine — and the turf is good quality. But the Polytan surface she saw at BC Place worried her.

“Some of our players know the turf because they play in Sweden, and some play on it in Switzerland,” said Voss-Tecklenburg. “The last four weeks directly before the World Cup, we will have all our training sessions and all our matches on the turf. I think it’s no problem if it’s good turf. No problem for my team. I think we are very good in technique and can play very fast. I think we have very good turf here in Edmonton and in other cities I hope it’s the same situation, because in Vancouver it’s a problem.

“The turf in Vancouver, in my opinion, is not good enough for the World Cup.”

Swedish coach Pia Sundhage, who left the American program in 2012 to go back to her native country, says that playing on turf might give her side an advantage. And they’ll need it. Sundhage will face her old team, the Americans, in Winnipeg in Group D play. The group, which also features Nigeria and Australia, is seen as the most difficult of the six at the Women’s World Cup.

“I would like to think we have a little bit of an advantage because the players in Sweden play in Allsvenskan, most of them play on turf. A different quality of turf, though. We do have a couple of players abroad, in France and in Germany, but everything we do, we want to do on turf — as much as possible.”

Sundhage said she’s also talked to men’s-team coaches in Sweden to see how they deal with multiple games on turf in short order.

“Well, it’s really important to play on turf as much as possible. At the end of the day, I’d rather have great turf, that the quality of it is the best, FIFA promises the best surface. I’d rather have that quality of turf compared to a bad grass field. Back in good old days, I played on those as well. So this (turf) will probably give us a bit more of a technical game, I hope. That’s what I am hoping for — keeping it on the ground and it’s not bouncing as much. If you look at the teams like Japan — I think they will love it. And, hopefully, the way Germany plays as well: Keep the ball, playing positive attacking football.”