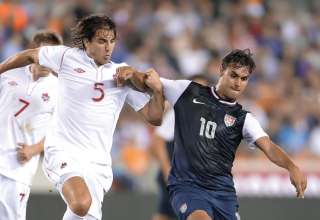 Go east, young man. That’s what Canadian defender Dejan Jakovic chose to do. A veteran of Major League Soccer, Jakovic made the move across the Pacific Ocean to begin a new chapter in his career. What does Japan have in store for him?

Canadian Soccer players moving abroad are common occurrences that, in this day and age, aren’t always noteworthy, particularly when it’s the typical landing spots like England, Germany, Sweden or Norway. But, one Canadian international has chosen a much different path, a path that could blaze a trail for his future countrymen to follow. After five seasons with D.C. United of Major League Soccer, Canadian men’s national team defender Dejan Jakovic signed with Shimizu S-Pulse of the Japanese J-League, becoming the first Canadian soccer player of note to make a permanent move to Japan.

“I was at D.C. for five years and I’ve had so many ups and downs,” said Jakovic. “The final decision was to move on and start a new chapter in my life. It’s an honour, I’m happy to be the first Canadian to go overseas [to Asia] and I hope to succeed and show other players they can succeed here.”

S-Pulse is based in Shimizu, a bustling Japanese port that’s part of the larger Shizuoka City.

The addition of Jakovic comes at a perfect time; the club conceded a total of 57 goals in 34 games last season, ranking fifth most in the Japanese top flight. That contributed to a disappointing mid-table finish.

Although being a Pacific Ocean away and a 14-hour time difference from Toronto, I caught up with Jakovic via phone.

The transfer came as something of a cost-cutting measure for D.C. United as it reshapes its squad after 2013’s last-place finish. According to numbers provided by the MLS Players’ Union, Jakovic’s base pay in 2013 was US$280,000, a large number in a salary-cap league. And, the same MLSPU document indicated that his guaranteed compensation came in at just over US$300,000. But, Jakovic is quick to point out it was his decision to leave the club.

“It was more my decision because I still had one year left on my contract,” says Jakovic. “My agent (former Whitecap-now-agent Justin Thompson) came told me about Shimizu S-Pulse and that they were interested in me.”

“To be honest with you, now that I’ve been here and I’m acclimated I’m really enjoying my time here. I love the food, which is definitely a good thing because, if I didn’t, I’d have a problem. So far, I love the sushi, but I love sushi back home in Canada.”

One area that’s still an adjustment for Jakovic is the language barrier when he tries to communicate with his Japanese colleagues. At this early stage, he’s working very hard but still needs a helping hand.

“It’s been a little tough. The good thing is the coach, Afshin Ghotbi, he’s American-Iranian and in training sessions he speaks English and he has a translator,” says Jakovic. “I’m trying to learn the language as fast as I can. I know a few words like right, left, forward, and we have two other international players on the team that speak English, which helps, but, other than that the communication with Japanese players is a little tough right now.”

Ghotbi is a former Iranian national-team head coach, who also spent time as an assistant with the South Korean national side. He was also on the staff of the Los Angeles Galaxy from
2004-05.

But when it comes to the soccer on the field, Jakovic has taken to it well and doesn’t hesitate to point out the main difference between MLS and the J-League.

Even with the different styles of play, there’s one element to both leagues that the six-foot-two central defender sees as almost identical.

“The J-League [much like MLS] is all very equal, on any given day any team can win. It’s whoever shows up and concentrates for the full 90 minutes.”

When I speak with Jakovic, the J-League season is two games old. He came on as a sub in a 3-2 win over Nagoya Grampus Eight, and played the full 90 in a 1-0 loss to league powerhouse, Yokohama. From the sound of it, its clear the experiences will stay with him forever.

“When I came into the Nagoya game I noticed how beautiful the stadium was, it’s probably one of the best stadiums I’ve played in my career. Then I looked over at the supporters section and I couldn’t believe how many fans came to support us, it almost felt like a home game,” says Jakovic. “At home we had a large crowd, it was really great, but it was a little disappointing that we had a poor performance.”

That poor performance he mentions is that early loss to Yokohama, which is still fresh in his mind.

“We had a big win in Nagoya and a tough loss against Yokohoma, a Yokohama team that is supposed to be the best team in the league,” says Jakovic. “I know they didn’t win it last year, but they were in first place a point ahead of Sanfrecce Hiroshima and just had to win at home but ended up losing 1-0 to Kawasaki
Frontale.

“We gave them too much respect. They have some experienced players but at the end of the day we still could’ve come out with at least a draw since we had a couple of chances towards the end.”

With the move to Asia brings the question of his place within the Canadian national team. With Benito Floro looking to change the team into a more technical side, does Jakovic see himself in the Spaniard’s future plans?

“I would think so, I think Benito has done a great job coming in and I like what he has brought to the national team. He likes to play out of the back and likes building out of the back. He’s a coach with a lot of experience and knows what he wants from his players.”

But Jakovic understands there will be games where the long travel just won’t allow for him to get called up.

“Now that I’m in Asia it’s going to be a little tougher to get to some of the games and some of the FIFA dates but, whenever I get called up, it’s always an honour to represent your country.”

Looking at the history of Canadian soccer, players have never been shy to test the waters in far-flung leagues but this move from Jakovic is on a completely different level. The J-League is emerging in a similar vein to that of MLS and NASL, with proven quality, but, even in these modern times of Internet streams, apps and channels dedicated to soccer coverage, there’s still a shade of mystery to it.

This is a chance for Jakovic to not only shed light onto a new pathway for future Canadian players but also give Canadian fans something to keep their eyes on.