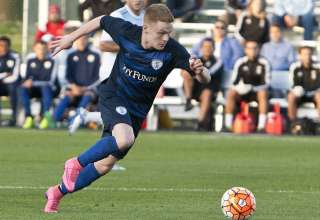 It’s still fresh, and the players, coaches and supporters of WFC2 aren’t going to want to hear this:

But the fact that Swope Park Rangers (the American affiliate of Sporting Kansas City) beat WFC2 (the Canadian affiliate of the Vancouver Whitecaps) 3-0 in the USL’s Western Conference final is actually a good thing for soccer north of the border.

But, let me finish my argument.

Swope Park Rangers, this season, have created one of the most interesting cultures in the North American soccer Petri dish. That’s because the club, despite being affiliated with an American MLS team, has embraced Canadian talent like no other U.S.-based pro team.

The double standard has been a great source of frustration for the Canadian Soccer Association. But, CSA and CONCACAF President Victor Montagliani said that he expects some kind of solution on the Canadians-as-domestic rule by the time MLS Cup rolls around. Whatever that solution is, it would spill over from MLS to NASL.

And, under the direction of Canadian coach Marc Dos Santos, who will be leaving to join the NASL San Francisco Deltas in 2017, Swope Park Rangers benefitted from the fact that Canadians are seen as domestics in the USL. In Saturday’s Western final against WFC2, Swope Park started four Canadians — Amer Didic, Jonathan Grant, Mark Anthony Gonzalez and Tyler Pasher.

On an American team going to a championship game.

Gonzalez had three goals in the playoffs before he set up the opener (then went off injured) against WFC2. Pasher set up the second goal and scored the third. (Correction: Pasher was credited with the assists on the second and third goals)

So, if there are any hiccups as the CSA hopes to create a new playing field for Canadians when it comes to MLS and NASL, Montagliani has the Swope Park Rangers example in his back pocket.

It gives him — and proponents of Canadian soccer development — a strong argument.