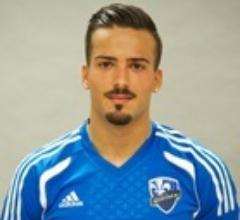 Dennis Iapichino’s days as a member of the Montreal Impact are over.

The club confirmed Tuesday that it had waived the Swiss fullback.

“He was not in our plans for the rest of the season or the future, but we wanted to give him the chance to find another team now,” Impact Sporting Director Nick De Santis was quoted in a release issued by the club.

Iapichinio arrived in Montreal during the 2012 season but never really found regular playing time on the backline. He appeared in just 16 MLS matches during his time in Montreal. According to figures provided by the MLS Players’ Union, Iapichino was on for a yearly salary of US$110,000.

Iapichino was roundly criticized for a poor performance which led to two goals in a stunning early-August loss to last-place D.C. United (CLICK HERE); and it looks as if that performance was the straw that broke the camel’s back when it came to the patience of the Impact’s front office.

Now, wait a second here. It is a conflict for someone to cover an MLS team but also be inv…