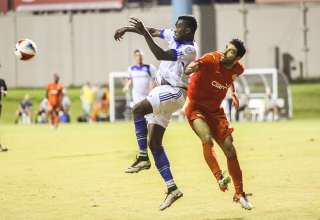 As Matt VanOekel made one of his series of very good saves on Saturday, Puerto Rico’s play-by-play announced declared that the FC Edmonton keeper was wearing his “superhero cape.”

And, as the NASL season progresses, the discussion will become more animated; is VanOekel not only the Eddies’ team MVP in 2016, but the MVP of the entire NASL?

The Eddies boast the best goals-against mark in the league; but, week after week, MVO makes saves that either hold the Eddies in games or preserve points.

It was the script again Saturday; VanOekel made some excellent saves, and then the Eddies got a late goal to take all three points. Tomi Ameobi headed home a cross from Dustin Corea after Shawn Nicklaw did some great work down the right side to create space. The 75th-minute goal gave the Eddies the 1-0 win.

“Big Matt made two or three very good saves to keep us in it,” said Eddies’ coach Colin Miller. The coach said the team played too loosely in the first half, and adjustments were made to tighten things up in the second.

For Ameobi, who has helped set up three goals in the previous two Eddies’ victories, it was only fitting that he finally got his first marker of the season.

“I had said to Tomi that I knew that it would come,” said Eddies’ Miller. “He can be a real handful. And if he can get to the form of the Tomi Ameobi we had last year before he got injured, well the sky is the limit for us.”

The victory has the Eddies tied atop the NASL fall-season standings with the Indy Eleven, but with a game in hand. But, remember that being tied with Indy is academic; the Eleven, as spring-season champions, already has its playoff spot. In the overall standings, the Eddies are a point behind Indy, but with that game in hand.

The game kicked off in 34 C heat (with the humidex). And, Puerto Rico’s Orange Agents had several good chances to open the scoring. But VanOekel, he of the superhero cape, made a sprawling save to deny Tyler Rudy’s volley attempt. He then made another good stop on a free kick before Cristiano Dias.

But his third big save of the first half was his best. Jorge Rivera got the ball unopposed down the left wing. MVO first came well out of the goal to challenge for the ball, realized he wasn’t going to get there, and retreated. Rivera came into the box, VanOekel stood tall, and deflected the shot away from goal.

Once again, Matt VanOekel will be an NASL play-of-the-week candidate. He could be the league’s player of the week, week after week after week. You get the feeling that the brass at NASL is just being nice, letting other players have the awards.

And, as the game went on, the Eddies’ defence tightened; Puerto Rico’s pressure was no longer paying off in chances. And, if anything, it looked like the home team might be struggling with fatigue more than the visitors.

Still, Puerto Rico had two late chances to get an equalizer; centre back Albert Watson got a last-ditch block in to ruin a scoring chance, then Orange Agent Rudy Dawson headed a ball just wide.

“I have to say, the heat and humidity down here was unbearable,” said Miller. “We simply don’t get conditions like this in Edmonton. And it speaks to the hard work the players had to put in.”

He said that it was so hot, that the Eddies who played in the game stayed behind after the whistle to cheer on the unused subs who had to run their laps after the match. They understood just how hard it was to be physically active on a steamy Bayamon night.

The Eddies left Edmonton Wednesday morning, and didn’t get to their hotel until 1 a.m. Thursday. But the Orange Agents played in Minnesota Wednesday, and got back to the Caribbean after FC Edmonton had arrived. Before the game, Colin Miller had said that FC Edmonton owners Tom and Dave Fath deserve a lot of credit for allocating the budget needed to allow the Eddies to embark earlier than they normally would for a road trip — to give the team the best chance possible at getting vital road points.

In the past two weeks, we’ve found out that Fort Lauderdale Strikers bused from Cincinnati for a road game at Indy, and that Rayo OKC’s, ahem, revamped front office has suggested that its team might have to bus to a lot of its road games — so the financial commitment the Eddies made to this 5,600-km (each way) road trip should be noted.

And it was visible in the second half, when the Eddies looked to have better legs than the home team.