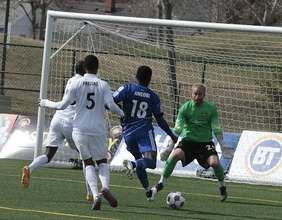 Most of the time, when I write a game report, I find the match can be neatly summarized; it’s easy to focus on the one incident that changed the game.

But, sometimes, there are games where so much happens, there are so many twists to the tale, that I wonder how to not turn in a novel-length description of what I have just seen (or called on air).

Right off the bat, we saw the two teams put their differing styles on display. The Strikers, with four Brazilians in the starting lineup, played a possession game, trying to get as many quick touches on the ball as possible; the Eddies tried to get the ball up to the wings where the speed of Sainey Nyassi on the right and Lance Laing on the left was a big advantage to the home team.

“Technique-wise, they were maybe the best team to come into Edmonton and play here,” Miller said of the Strikers.

But, despite the early possession, it was the Eddies who struck first. Nyassi got the ball down the right wing, then turned Navarro inside-out. With lots of space, Nyassi sent a clever pass to the top of the Fort Lauderdale penalty area for Ritchie Jones to side-foot home.

It would be the first of many scoring chances for Jones. Emphasis on “many.”

But Fort Lauderdale’s quick-passing game would begin to stretch the Eddies. And, a tired-looking Cristian Raudales ended up giving up the ball to Strikers’ attacker Dani Sanchez, who shuffled the ball from his right foot to his left before driving the equalizer into the top corner.

The scoring chances would come fast and furious. Fort Lauderdale’s Jose Angulo hit the underside of the bar with a thunderous volley.

With Fort Lauderdale on the front foot, Miller took a gamble; he yanked the ineffective Raudales in the 30th minute and gave El Salvadorean youth international Tomas Granitto his Eddies debut; with that, the momentum shifted. Granitto was able to press the ball and get the ball wide to Laing and Nyassi.

Granitto said he studied the game while he was on the bench and knew he had to press the ball when he came in.

“We have speed on the wings, [the wide passes] are a great way to open up the field. I was looking to pressure the ball and get the team moving forward.”

“Cristian Raudales wasn’t having a good day,” Miller admitted. He figured that the young. eager Granitto might be a difference-maker. “I brought him in for the team’s benefit.”

Granitto sprayed a pass on the right to Nyassi; when Nyassi got to the box, he went down — and Schaap pointed to the penalty spot, ruling that Navarro had fouled the FCE winger. Jonke, who has yet to score an NASL goal for the Eddies since coming to the team last year, stepped to spot — and had his effort saved by Meves.

Meves also made a ridiculous double-save on Jones.

To start the second half, Granitto sprayed a ball to the left that freed Laing down the wing; he sent a perfect pass to the middle of the box, and Jonke met the ball. But, Meves, scrambling off his line, was able to take the angle away and made yet another remarkable save.

Meves then robbed Jones (and would do it again later in the half for good measure). Jones could have had a hat trick and then some in this game, but Meves’s brave keeping somehow kept the game level.

With FC Edmonton now carrying the momentum, they fell victim to a self-inflicted wound. A tame shot from Angulo was spilled by keeper Matt Van Oekel, and Brazilian veteran Leo Moura took the gift for a tap-in.

And this was the gut check for the Eddies. Would this team, winless in its first two matches of the season, allow a hot goalie and its own error to be its downfall? In the 73rd minute, Miller brought in Tomi Ameobi and Sadi Jalali into the game. With his first touch, Ameobi split the Strikers defence with a great run, only to be denied by yet another highlight-reel save from Meves.

But on the ensuing corner, the ball fell to Nyassi, who hammered the ball into the corner to tie the game.

And, off a Laing cross, Ameobi would leap high into the air to nod home the winner off the underside of the bar.

“If [Ameobi] played like that consistently, he wouldn’t be at FC Edmonton,” said Miller. “He’d be at another level.”

And he also was filled with praise for Nyassi, who has so far been the Eddies’ most dynamic player over the first three games of the season. In Miller’s mind, Nyassi is still at the MLS level.

It was an epic match with so much to talk about. FC Edmonton showed just how dangerous it can be if it is allowed to widen the field. The Strikers showed off a mesmerizing passing game. And, in the end, some inspired subs allowed the Eddies to edge what was the most entertaining FC Edmonton game I’ve seen.

And I have seen them all.