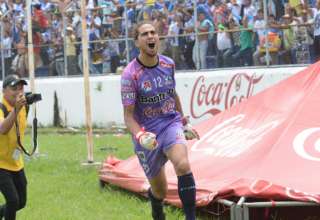 Canadian goalkeeper David Monsalve moved into uncharted territory when he agreed to join Guatemalan side CD Suchitepéquez. Monsalve and his teammates finished at top of the table, then swept through the playoffs. They earned the club its second league title in its history, and a spot in the CONCACAF Champions League. But, all the while, Monsalve and his teammates weren’t getting paid…

Here’s a tagline that you don’t often associate with a Canadian soccer player: Champion of Guatemala.

But former Toronto FC and FC Edmonton keeper David Monsalve can reflect on what’s been truly a remarkable season. In May, he was in goal as hisGuatemalan side, CD Suchitepéquez, beat Comunicaciones in “El Final,” the two-legged end to the domestic season. After losing the first game by a 2-1 count, Suchitepéquez roared back in the second game; on home turf, Monsalve and co. beat Comunicaciones, by a 3-0 count.

For the well-traveled Monsalve, who has also played in Finland and Colombia, the title capped off what could be called an, ahem, interesting season. While he and his Suchitepéquez teammates were on course to win the regular-season title and earn the top seed in the Guatemalan playoffs, they were also embroiled in a very public and bitter battle with their own team’s front office. They didn’t sport official team gear during their training sessions.

Why? They weren’t getting paid. Oh, how often have we heard the plights of Canadian players who haven’t got paid — there was Josh Simpson and Mike Klukowski in Turkey; Tosaint Ricketts in Romania and, again, in Turkey. While Canadian soccer supporters often joke about the number of national-team-pool players registered to “Unattached FC,” maybe there should be another class of players — “Unpaid FC.”

Monsalve said in early May that the club squared its January accounts with its players, and the team members have received about 90 per cent of their February pay. But they hadn’t been paid for March or April. The payments came in dribs and drabs. So, the players created what was basically a work-to-rule mentality.

“We haven’t been paid in a while,” said Monsalve, who had to turn down a Canadian national-team invite last year while he was with Colombian side América de Cali. “It’s an issue with the directors, and the whole country knows what is happening. Something fishy is going on.”

But the players never took their battle further than the work-to-rule campaign. They felt that it would be unfair to the supporters and themselves to take strike action and sabotage what really has been a Cinderella season for a club that only had one previous national championship on its collective résumé.

“We want to play,” said Monsalve. “We want to train. We don’t want to give up on all the hard work we’ve done this season.”

And that work has earned the club a spot in the CONCACAF Champions League, where it has been placed in a group alongside Major League Soccer’s FC Dallas.

“CCL is a huge deal for this club,” said the keeper. “Happy I was part of it.”

Focus on the “was.” Because, after the title was won, Monsalve announced that he wouldn’t be returning to the club, even though he had no other contract offers in place  at the time. He helped earn the team a shot at CONCACAF Champions League play, but won’t be taking part in the competition.

He claimed that he never felt supported by the club — not being paid will do that to a guy.

But how did a Canadian keeper get a job in Guatemala — a place which has been very inhospitable to Canadian national teams in past CONCACAF qualifiers? Monsalve made many friends in Finland during his playing time with both Inter Turku and Oulu. As it became clear that he was not going to remain with Cali, a club with which he’d signed in late 2014, Monsalve got a call from a friend in Finland who recommended an Argentine agent. That agent then recommended Suchitepéquez. At first,

Monsalve was skeptical. He had a wife. A young son. Did he want to take them all to Central America? He was ready to say no.

“But my wife said I have to take whatever’s secure,” recalled Monsalve. “And, because I had nothing else, I took what was secure.”

It was a reality check for Monsalve, who has had to get used to the fact that his passport is curse. He had auditioned for Jacksonville of the NASL, but the team told him that, because he would count as an international until he got a U.S. green card, the club would not be able to sign him until he got that documentation. That’s what spurred him to move to Colombia. América de Cali is abig club; one of South America’s biggest teams. Monsalvethought that, for sure, having that on his résumé wouldopen doors. It didn’t. What clubs saw was that he was a Canadian — and Canadians need not apply. He spent the end of the 2015 NASL season training with the Ottawa Fury (though never a part of the roster). He was disappointed when the team lost the Soccer Bowl finaleto the New York Cosmos.

“It’s not the most ideal conditions, it’s not what we’re used to,” he said. “But it is a really nice country. We’re used to life in a very different way. We have big malls and big cities. Now I live in a place where everyone knows everybody.”

But, despite the less-than-ideal facilities, despite the fact some players aren’t getting paid, third-world Guatemala has something that first-world Canada does not — it’s own national league. And Monsalve believes that has to change.

“A lot of the places where we play aren’t the best, the dressing rooms aren’t the best, but it is still a national league. People are being paid to play soccer. And that’s something Canada needs to look at. Really, it blows my mind that Canada, without a pro league, has a national team that’s better than Guatemala, which has its own league. But we need to have one in Canada. Look, MLS has lots of rich owners, but to start a league in Canada you need to just have a good plan, start small and then get stronger.”