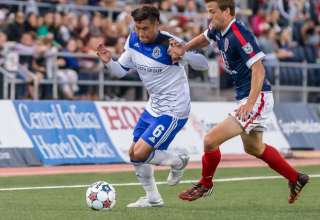 Dustin Corea (6) in action against the Indy Eleven.

FC Edmonton got two huge second-half goals in Indianapolis, and is now just two points back of the Tampa Bay Rowdies for fourth spot in the NASL overall table with a month and a half left to go in the season. That fourth spot represents the final post-season slot in the league.

The Eddies triumphed 2-0 Saturday over the Indy Eleven.

“At the end of the game, I said to [assistant coach] Jeff Paulus, ‘what a terrific, professional performance away from home,” said FCE coach Colin Miller.

“It was a terrific performance from us tonight, from a defensive point of view… West Ham showed that if you’re committed to play well defensively, and show some quality when you attack, you can get the result. I’m not saying that we are Premier League quality; but what I am saying is that same principles apply here.”

The game turned in the 55th minute; just seconds after Indy’s Wojciech Wojcick headed the ball just over the bar at the Edmonton end, the Eddies took the ball up the left wing. Lance Laing, with two defenders on him, threaded a pass into the Eleven’s penalty area. Daryl Fordyce’s first touch took it past Indy defender Erick Norales, who decided to try for the slide tackle — and missed. With his second touch, Fordyce slotted the ball through the legs of keeper Kristian Nicht.

Because of Tomi Ameobi’s emergence as the no. 1 choice up top — a knee injury kept him out of his second consecutive match — Fordyce hasn’t had the chance to play many games as the out-and-out striker in the FCE set-up.

On a rainy night in the American midwest, the Eddies sealed the game in the 85th minute, when substitute Sainey Nyassi slammed a shot off the post and into the goal. It was an absolutely unstoppable drive from the Gambian.

Really, Indy’s best chance came just 35 seconds into the game. Wojcik was able to get past FCE fullback Allan Zebie, then funnelled a ball to Eleven striker Dane Richards. The former Red Bull and Whitecap pushed his attempt just wide. That would be as close as Indy would get to really giving FCE keeper Matt VanOekel a white-knuckle moment.

But it was the Eddies who had the best scoring opportunity of the first half; after Norales misjudged a long ball and let it bounce behind him, it was picked up by Eddies’ midfielder Pablo Cruz. He lobbed the ball into the middle of the box for Dustin Corea, who tried to half-volley the ball into goal. But Nicht, the Indy keeper, scrambled across his area and made a diving stop.

Indy had many decent spells of possession, but did little when it came to creating chances inside the Edmonton penalty area.

“I didn’t feel like they were going to score on us from open play,” said Miller. “I thought maybe, if someone fell asleep, they could get us on a corner kick or a free kick. But, to the players’ credit, we defended very well tonight.”