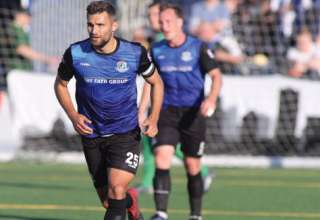 Last season, Canadian national-teamer Marcel de Jong signed a spring season contract with the Ottawa Fury, but then left the team and joined the Vancouver Whitecaps as a free agent.

FC Edmonton signed Canadian national-teamer Adam Straith to a spring-season contract in 2017 and coach Colin Miller made it clear he hoped that he and Straith could extend the deal to last through the fall campaign. But, that wasn’t to be; so, like De Jong last year, Straith’s NASL stint will last just a half-season.

On Friday, the team announced that Straith would not be back for the fall campaign.

Straith scored once for the Eddies in 11 spring-season  games, and played a mix of matches in central defence and holding midfield.

With Straith gone, that means more responsibility for Canadians Mauro Eustaquio, Allan Zebie and Nik Ledgerwood in the middle of the park. Ledgerwood missed a good chunk of the spring season due to injury, while Eustaquio has worked his way into the starting lineup. Zebie has done well moving from the fullback spot to midfield.

“Originally it was a short-term situation for us and we would’ve liked to work something out long term, but unfortunately that wasn’t the case,” FCE coach Colin Miller said in a release. “It’s a loss to us but if we can’t come to an agreement, it’s just the nature of the sport.”