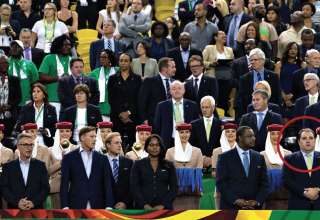 In 2012, Victor Montagliani was elected as the new president of the Canadian Soccer Association. At the time he took over the biggest position in the Canadian game, the relationships with Major League Soccer and the United States were, in his words, “non-existent.” While there are now some bridges being built, we’ve still got a long way to go…

According to CSA President Victor Montagliani, when he took over in 2012, the Americans saw the CSA as nothing more than an organ that would rubber-stamp whatever MLS wanted; that included a 2011 change in the rules that saw Americans treated as domestics on Canadian teams, and quotas for Canadian players on Canadian MLS teams reduced to three per squad.

“Until two to three years ago, the relationship was non-existent,” says Montagliani. “Basically, we were a foregone conclusion to our friends from the south. But we have strengthened our relationship, first with the USSF, and now we have better relationships at the MLS level, and the NASL level. Our relationships are improving but, remember, it’s been just two or three years.”

Maybe the biggest sign of an improved partnership between the Americans and Canadians is the deal which allows the CSA to place up to 16 players on the rosters of National Women’s Soccer League teams; the CSA looks after the salaries of the players.

But, in 2015, John Herdman, the coach of the national women’s team, elected to place just 13 of 16 players on the rosters of the nine U.S.-based NWSL clubs. Montagliani says the idea of bringing Canada into the fold — to help launch an elite women’s soccer league that could stand on its own — came from USSF President Sunil Gulati. He reached out to Canada and Mexico, realizing that several goals could be achieved. For a new league, some of the players’ salaries could be subsidized, making it more attractive to investors. As well, the league would still serve the interests of American soccer players, but also offer space to Canadian and Mexican athletes.

For Montagliani, the next step would be to see a Canadian investor take a chance and place an NWSL franchise on this side of the border.

“Hopefully there will be new cities that want to join NWSL, and that they can use the success of the World Cup in Canada as a platform. In the first year, there was interest from the Canadian MLS cities. They looked at it. But the timing wasn’t right from them to pull the trigger.”

On the men’s side, however, there is still plenty of disagreement between Montagliani and our neighbours to the south. The issue of Canadians not being counted as domestic players on the U.S.- based NASL and MLS teams continues to stick in Montagliani’s craw. MLS Commissioner Don Garber had maintained that U.S. labour law prevented Canadians from being considered domestics on the rosters of American teams. But, at the same time, Canadian MLS (and NASL) teams are given the opportunity to give domestic slots to American players. In the summer of 2014, facing mounting pressure, Garber promised a change to the domestic rule was coming; but, by December, he’d fallen back to the old labour-market argument.

“In regards to seeing Canadian players as domestics, we respectfully disagree in regards to their position,” says Montagliani. “Our position is clear, from a legal standpoint and from a moral standpoint. But, right now, we are focused on some other things we can do to help the Canadian game. We should be hearing some things out of MLS very soon, about some things at the academy level.”

In 2014, the CSA agreed to sanction three third-division USL-PRO teams on Canadian soil. Those teams, affiliated with their Canadian MLS parent clubs, will be located in Montreal, Toronto and Vancouver. But no formal debate has been held in terms of allowing these teams into our national championship tournament and the chance to play for the Voyageurs Cup. The teams will be reviewed at the end of the 2015 season, and will be expected to abide by strict Can-con rules which would force each of the three USL-PRO sides to ensure that six of the 11 players on the field are eligible for Canadian team call-ups.

(It’s worth noting again that, unlike MLS or NASL, USL-PRO sees Canadian players as domestics league-wide, not just on the Canadian teams.)

But Montagliani says that the one-year sanction reviews shouldn’t be seen as that big of a deal. Basically, it’s like triple-filtered beer; a marketing team can make a basic part of the brewing process seem special.  In soccer, every team and league works on year-to-year sanctioning. Sure, for the most part it’s a rubber-stamp process, but at any time a federation can try and revoke asanction.

“Sanctioning is always an annual process, a lot of people fail to see that,” says Montagliani. “Even MLS is subject to this. Yes, the process is pretty well rubber-stamped, but sanctioning of teams is not an evergreen thing.”

The partnership — if we can truly call it a partnership — between the U.S. and Canada is unique. The two countries share leagues, but each federation has to look out for the best interests of its own players.

You can’t blame the USSF for trying to ensure that the Americans have more job opportunities than Canadians. But, it’s up to Canadians to ensure they’re not taken for granted.

And Montagliani promises the days of the rubber-stamp are over.

“For me, it’s not about growing the game. It’s about growing the Canadian game. And acquiescence to the United States is not the way to do it. The way to do it is to develop a real partnership, a real relationship and have meaningful debate between us. Look, I don’t wake up in the morning and wonder what I can do to help U.S. soccer. I don’t. And, to be fair, I’m sure they don’t think about what they can do to help Canadian soccer, either.”