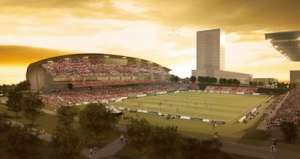 Artist's rendering of soccer at the new Ottawa stadium.

The NASL believes that the Ottawa expansion team will be ready to play in 2014, even if the stadium isn’t. But sources close to the Canadian Soccer Association have told The 11 that Ottawa won’t be a host city for the U-20 Women’s World Cup.

According to reports out of the nation’s capital, city council is expected to vote Oct. 10 on the $400 million Lansdowne Park redevelopment, a partnership with the Ottawa Sports and Entertainment Group, which will own the NASL franchise and the incoming CFL expansion side.

But, according to the Ottawa Citizen (CLICK HERE), the renovations to Frank Clair Stadium won’t be completed until June 2014. That makes it a tight fit in order for the city to host games for the U-20 Women’s World Cup, which is set to begin at the time the stadium is completed.

With the tight timelines, the CSA no longer expects Ottawa to be ready for the U-20 WWC, but the city is still on target for the big prize, the Women’s World Cup in 2015.

And, a June 2014 date would mean the stadium won’t be ready for the March, 2014 opening of the NASL season (though, as a northern franchise, Ottawa likely wouldn’t have a scheduled home game till April). But NASL officials confirmed Wednesday that OSEG is “eager” to begin play in 2014.

And, while John Pugh, the head of Ottawa’s NASL expansion bid, has said the team has been against playing in a temporary facility, that might be one of the alternatives if the team is to be ready for spring 2014. NASL has stated it is willing to work with OSEG to find a “stop-gap” home for the team until the Frank Clair site is ready for soccer in June of 2014.

Of course, there is another alternative — but one NASL has not commented on to this point in regards to Ottawa or any of its incoming expansion sides. With the new split-season format, the door is open to bringing in a team for the “clausura” if it isn’t ready to play in time for the “apertura.” Beginning in 2013, NASL plays two seasons in one year; from March to early July, then from late July to November. The winners of each season will meet each other in the Soccer Bowl. But, if the second half sees all the teams go back to 0-0-0 in the standings, it is plausible that a team could be introduced for the clausura even though it wasn’t ready to play in the apertura.