Clarke Stadium will only have a capacity for about 2,000 seated fans — plus standing room — for FC Edmonton’s home opener Sunday against the Minnesota Stars.

While the Clarke Stadium field is artificial turf and can deal with the wet weather, the grounds surrounding it are not. The large amounts of rain and snow Edmonton has seen over the last week have turned the area into a quagmire, and have caused severe construction delays.

FC Edmonton confirmed Monday that the plans to add temporary stands to the facility are behind schedule because of the wet weather. Because of the mud and rain, the team has not been able to construct the expected 3,000 seats of temporary bleachers that were to augment the already existing stand, which seats 800-1,200, depending on whose estimate you believe.

According to FCE spokesman Andreas Morse, the area surrounding the field is too soft to have the bleachers placed on it at the moment. The bleachers would simply sink into the muck, like tossing change into quicksand. 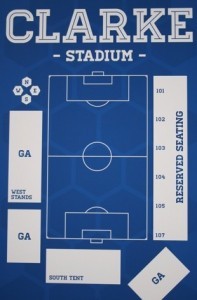 So, the club is bringing a lighter three-row bleacher setup for the first game and building platforms to keep patrons from getting muddy at Sunday’s match.

FCE announced in late March that it was moving from Foote Field to Clarke, located next door to Commonwealth Stadium, and had plans to boost seating to 4,000 seated, plus 1,000 standing room. A beer garden was slated for one end of the stadium, with a children’s play area by the other.

Luckily, FCE doesn’t have the construction issues exacerbated by a heavy home schedule. After the April 22 match, the team doesn’t have another NASL home game until May 6, against the Carolina RailHawks. The May 2 Amway Canadian Championship game against the Vancouver Whitecaps will be played at Commonwealth Stadium.

Because the move was announced in late March, with construction slated to begin April 10, it was always going to be a race against time to get the facility fully operational for the April 22 match. And the weather turned on FCE, which seems to be having a run of bad luck. Stadium delays, a training injury to No. 1 keeper David Monsalve and the fact that Chilean striker Yashir Pinto, who scored a wonder goal in a reserve match over the weekend, still can’t cross the border to play games in the United States due to a slow, slow immigration-paperwork process.

The club has lost its first two games of the season, both on the road — and has yet to score. FCE plays in Puerto Rico Wednesday night.