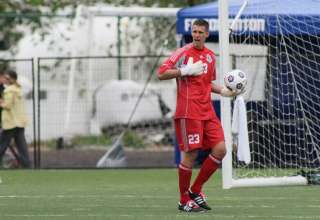 John Smits has never before been in a situation where he’s had to play out the string.

Every season before this, whether it was elite level amateur teams in the Greater Toronto Area, or during his collegiate career with the University of Toronto, the FC Edmonton keeper hasn’t been on a team that was eliminated from post-season contention well before the regular season came to a close.

That changed during Smits’ rookie pro season with the Eddies. The team has known for a couple of weeks that it is doing nothing more than playing for pride. FCE sits at the bottom of the NASL standings heading into Sunday’s season finale at home to the Fort Lauderdale Strikers.

Smits, FCE’s usual No. 2 keeper when Lance Parker is healthy, got the start last week in a 3-0 loss to the Rowdies, a game which also saw Coach Harry Sinkgraven give 45 minutes to rookie striker Elvir Gigolaj and a late run-out for young fullback Dino Gardner.

While Sinkgraven hasn’t told any of his players whether they are starting or sitting for Sunday’s match, there should be opportunities again for Gigolaj, whose movement on and off the ball was impressive last week, and Gardner, as regular right back Antonio Rago is out because of yellow-card accumulation. Leading scorer Shaun Saiko is doubtful for Sunday; he missed last week’s game due to injury and didn’t train Wednesday.

And Smits will be ready if called upon to start the final game of the season.

Even though the Eddies had only pride to play for last weekend, the loss to the Rowdies still stung. After dominating much of the opening half, two major defensive lapses — including leaving Rowdies’ striker Daniel Antoniuk unmarked on a set piece — led to two goals.

“It’s definitely frustrating, when things don’t go well, and the guys are not on the same page,” said Smits of the loss. “But I still enjoy every moment I have out there.”

Such is the exuberance of a player who came out of the University of Toronto, then played his way ahead of ex-TFC keeper David Monsalve and national U-20 netminder Michal Misiewicz on the Eddies’ depth chart. Smits doesn’t take any second of his professional career for granted. When the season wraps up, he will head back home to train with his old U of T mates.

“I have to do some fine-tuning,” he said. “There are some things in my game I have recognized that I have to work on. It’s so much different at this level; in elite amateur and in my collegiate career, I was never under the microscope like I am now. One thing I want to work on is my quickness; before, I was just doing the basic exercises, but here the training is a lot more focused. I want to have quicker feet, to have better movement.”