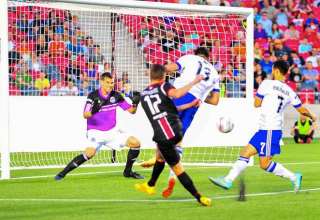 John Smits in action against the Ottawa Fury.

Just before Sunday’s season finale against Jacksonville, FC Edmonton coach Colin Miller said he’d made up his mind about five players who were going to be released from the club at the end of the season.

On Wednesday, the team revealed the identity of those players who have been released; Canadian goalkeeper John Smits, Canadian striker Frank Jonke, defender Kareem Moses and midfielders Tomas Granitto and Thiago de Freitas.

Smits won the NASL Golden Glove Award last year, for having the league’s best goals-against average. He lost the starting job to Matt VanOekel at the start of the season. But Smits was loaned out to the Montreal Impact to serve as a back-up keeper for CONCACAF Champions League matches. He was given the chance to reclaim the Eddies’ No. 1 job but, in the team’s final game of the spring season, a 3-0 loss to the Indy Eleven, he was substituted out at half time and was relegated to the role of No. 3 keeper.

In two years with FC Edmonton, Jonke failed to score a goal in regular-season play.

Moses was a fan favourite but was part of a back line that gave up the most goals in the NASL spring season. He’s also struggled with injuries through 2015.

Both Granitto and de Freitas made their FC Edmonton debuts in 2015; despite showing real promise, both had their campaigns derailed by injuries.

In a release, Miller confirmed that 13 players are on the roster for 2016, and negotiations are underway with seven others. Of course, key in that group is left winger Lance Laing, who was the team’s sparkplug this season. Laing missed about a third of the season due to Jamaican national team duty, and the Eddies won just once without him. As well, captain Albert Watson and Daryl Fordyce will need new deals.

“I’ve never been a manager who wanted to reinvent the wheel and start from scratch again,” Miller said. “I think that would be quite foolish with our strong group of core players. Our job in the off-season is to bring in players that will add genuine quality to the group that is currently here.”

SUPPORT OUR DRIVE FOR 500! SUBSCRIBE TO PLASTIC PITCH TODAY!