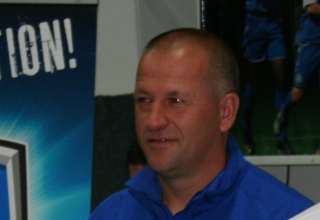 After meetings were held this past week by the FC Edmonton brain trust, including owner Tom Fath, director of soccer operations Joe Petrone and general manager Tom Leip, the decisions were made to axe the two Dutch coaches — even though both were signed to extensions in July. Those extensions would have carried them through the 2013 season.

But today’s decision was a clear message that ownership felt that, despite the vote of confidence issued to the coaches in July, the team’s finish in the bottom of the NASL standings was too much to bear.

Sinkgraven got the news Thursday night.

“In soccer, there is always the possibility of this happening. The results aren’t good, and Tom (Fath) wanted to save some money. I didn’t see it coming at first, but if you look at the budget, the cuts to the winter program (FCE had trained over the winter the past two seasons), then I knew something was going to happen.”

Sinkgraven said he and Fath “came to an arrangement” regarding the 2013 portion of his deal.

Now, Sinkgraven will begin the process of looking for a new job.

“Of course, I have been in professional soccer for 25 years, and I want to spend another 25 years in pro soccer. It was nice to work in Edmonton, it’s great to work with a bunch of guys trying to achieve something in soccer. I hope the community will support FC Edmonton, and help get a stadium built for the club.”

“It’s sad to see people let go from the team,” said Hamilton. “When you have a season like we did, changes are inevitable. We have lost some teammates, and now it is the coaches.

“Harry has spent two years with the club and, while Hans was here for this year, I worked with him a lot.”

Sinkgraven was hired before the 2011 season. Dwight Lodeweges — with Schrijver as his assistant — ran the team in 2010, during a very successful season of exhibition matches as the club prepared to enter NASL. But Lodeweges and Schrijver were offered the chance to coach Japanese second-division side JEF United, and recommended Sinkgraven for the job.

With Sinkgraven as boss, Edmonton got to the halfway mark of its first NASL season in second place, then after July the team took a massive dip in form — and squeaked into the playoffs, where it was hammered 5-0 by Fort Lauderdale. This season, despite having one of the highest payrolls in the league, the club only won five of 28 league games.

But maybe even more troubling was the very public suspensions of two local players — Shaun Saiko and Matt Lam. Saiko was suspended for an August match against Minnesota — and was forbidden from coming to the stadium to even watch the match. Sinkgraven claimed that it was because he felt that Saiko, the team’s scoring leader, hadn’t worked hard enough in training.

And then Lam was suspended from late August to the end of the season — he was released earlier this week — for what the team called disciplinary issues.

But, judging from the chants from the supporters’ groups and the messages posted on this site and on other FCE message boards, the suspensions galvanized public opinion against Sinkgraven.

Schrijver returned to Edmonton for the 2012 season after he and Lodeweges were let go by JEF United — as they had made a deal to get the team promoted… or else. He replaced Dave Randall, who was sacked by the club after the 2011 campaign.

Now, the search begins for a new coach for this club.