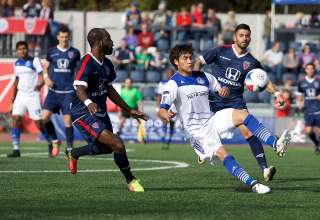 Ubiparipovic’s 63rd-minute shot from the top of the box found the top corner of the Eddies’ goal, giving the Indy Eleven a 1-0 home win in the first of two NASL Championship seminfinals played in Saturday.

Miller thought that the Eddies did a good job eliminating the Eleven’s top two scoring threats — forwards Eamon Zayed and Justin Braun — from the game. But it stung that a member of Indy’s supporting cast was able to step and deliver the vital strike.

The Eddies had a great chance to equalize with three minutes left in the game, but Indy keeper Jon Busch sprawled to knock away Tomi Ameobi’s headed effort.

But, really, you can argue that the game was lost in the first 15 minutes of the match. Instead of starting the game off in a defensive shell — as many would have predicted — the Eddies came out looking to catch the Indy Eleven with an early sucker punch. The Eddies attacked. They brought numbers forward. And, they created two very good scoring chances.

In the eighth minute, Sainey Nyassi streaked forward to get on the end of a cross from Shawn Nicklaw. But Nyassi’s headed effort bounded off the crossbar. That came just a couple of minutes after Dustin Corea got a shot towards goal.

The game settled down after the Eddies’ early surge, and Indy created some good chances as the half wound down. The best came in the 37th minute; after the ball pinged around in the penalty area, Marco Franco got a foot to the ball and it bounded towards the corner of the Eddies’ goal. But keeper Matt VanOekel dove to swat it away, smashing his head into the goalpost in the process.

The Eddies won the toss and chose sides, hoping that the setting sun in the second half would distract Busch. But it was Indy that created the best chance early, with former Toronto FC striker Justin Braun nudging a header just wide.

And, just as the game had settled into a lull, Ubiparipovic, the former Montreal Impact and Ottawa Fury man, pounced. Indy’s Dylan Mares had collected the ball at the top of the box and Ubiparipovic brought his foot through the ball, sending an oh-so-well-placed shot just inside the corner where the far post met the crossbar.

Miller brought in attackers Ben Fisk and Jake Keegan to shore up the attack, but the Eddies were only able to generate the one big Ameobi chance. In injury time, Eddie Adam Eckersley was brought down by Franco just outside Indy’s penalty area, and referee Sorin Stoica told the Eddies’ fullback to get up and get on with it. Eckersley, incensed by the non-call, chased Stoica down the field and got a yellow card for his protestations. That would be the enduring final image of the Eddies’ season.

Miller said he spoke to the team for 10-15 minutes after the final whistle.

And, looking to next year, Miller said he’ll want to bring more proven match-winners and experience into the club.