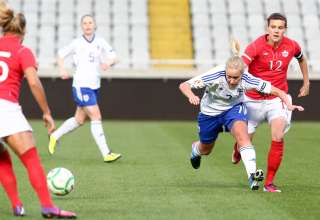 Christine Sinclair came back from suspension, and promptly scored a winning goal.

Sure, it was on a penalty kick, probably won’t make her career-end highlight reel, but it was the winner as Canada beat Finland 2-1 at the Cyprus Cup Friday. Canada is 2-0-0 at the tournament. The goal was the 144th international marker for Sinclair.

With the win, Canada has already clinched top spot in Group B and a spot in the Cyprus Cup final. That means the final group-stage match, against the Netherlands, will be a glorified friendly — and gives the chance for coach John Herdman to rotate players.

Sinclair, our country’s all time leading scorer, had to miss all of the Yongchuan Cup and Canada’s opening match of the Cyprus Cup thanks to a FIFA imposed suspension issued after the Olympics. After the 2012 Olympic semifinal, which Canada lost 4-3 in extra time despite a hat trick from Sinclair, she ranted to the media about what she felt was biased officiating. No action was taken before the bronze-medal match, which Canada won over France 1-0, but FIFA issued the ban after the tournament.

Jonelle Filigno’s goal, her 10th career marker for the women’s team, brought Canada level after the Finns had taken a 1-0 lead after just six minutes. Emmi Alanen’s shot found the top corner after a pass from Nora Heroum.

Karina LeBlanc played the first half in goal for Canada; former Edmonton Aviator Stephanie Labbe came in and finished the match.