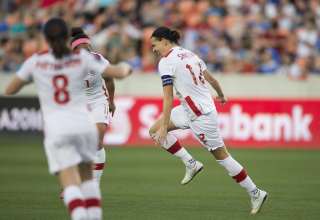 A lot has been made of Canada’s evolution, its youth movement, the “mavericks” (coach John Herdman’s term) who have been brought in since the World Cup to bring more inventiveness to the national women’s team.

So, of course Christine Sinclair, our standard bearer, would score the goals that clinched Canada’s spot at the Rio Olympics.

So far, through four tournament matches, the aggregate score is Canada 24, CONCACAF 1.

In the first half, Sinclair brought down a cross from Josee Belanger with her first touch; hee second touch was a shot that arrowed into the goal. But she outdid herself in the second half; with her back to goal, she intercepted a poor Costa Rican clearance. With her first touch, she stopped the ball’s progress. She then turned, whipped through the ball and smashed it off the underside of the bar and in.

And to think that she was limping through the match. To think she’s nursing a calf injury. She has simply added another chapter to her legend.

“The girls were fantastic, they owned that game,” a bubbling Herdman was quoted on the CONCACAF feed after the match.

“We got a lot of crosses in, and I was lucky to get on the end of a couple of them,” said Sinclair.

Costa Rica got one back with 20 minutes left. Raquel Rodriguez converted from the spot after Canadian midfielder Desiree Scott made a poor decision to dive in and attempt a tackle when there were plenty of her teammates in the penalty area.

But, Canada got the two-goal cushion back late in the game, when a hoof from keeper Erin McLeod got behind the Costa Rican backline, and Nichelle Prince crossed to teenager Deanne Rose. The ball more or less went off Rose and went in.

It wasn’t nearly as pretty as either of the Sinclair goals. But they all count.