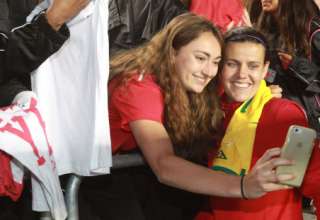 Many Canadian soccer message boards have been buzzing with speculation about the new Canadian Premier League, which could offer new playing opportunities for men who can’t find opportunities abroad.

The CanPL could a solution to get this country’s male players more time on the pitch. But what about the women?

In accepting her 13th Canadian Female Player of the Year Award, Christine Sinclair suggested that NWSL expansion into Canada would be the way to add more jobs for women.

“The same opportunities are not there yet for women as there are for men,” said Sinclair, who in 2016 moved ahead of American legend Mia Hamm for the No. 2 spot on the FIFA all-time international scoring list. “Being from Canada, I’d love to see maybe a couple of Canadian teams in the NWSL. There are Canadian teams in MLS. I think that’s the goal in the next couple of years, to expand the NWSL into Canada. Right now there only 12 to 14 Canadian players in the NWSL.”

In fact, over the years, the number has dwindled. The Canadian Soccer Association has an agreement in place which allows it to subsidize the salaries of up to 16 players, who are then allocated to NWSL clubs. But, in recent years, Canada has not maxed out its allocation, leaving some of those 16 spots vacant.

And, young Canadians are choosing to move away from North America. Ashley Lawrence and Kadeisha Buchanan both left the University of West Virginia in January to sign deals with Paris Saint-Germain and Lyon, respectively.

Before Canada hosted the Women’s World Cup in 2015, CSA General Secretary Peter Montopoli said the hopes were that the success of the tournament would spur interest in NWSL north of the border.

“Absolutely. We believe that, after 2015, the interest will be there for at least one city to be a part of NWSL,” said Montopoli.

“The interest will merit it…. It certainly presents an opportunity for an owner [in Canada] to be part of NWSL. We have had those initial discussions with NWSL but we’re currently waiting to see the success of 2015 before we get there.”