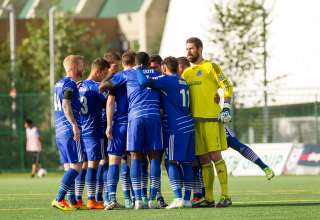 FC Edmonton coach Colin Miller thinks that, until the Eddies or the Ottawa Fury win the Soccer Bowl, neither of the Canadian NASL sides will truly get league-wide respect.

“We’re happy with that; let them have that mentality,” said Eddies captain Albert Watson. “It’s a mentality that they don’t expect much from us and we hit them with the sucker punch.”

Put it this way: Seventeen weeks have been contested in the NASL season; and an Eddies has been named a player of the week just once. Two weeks ago, the Eddie-snubbing hit an all-time high; the player of the week award went to New York’s Lucky Mkosana, didn’t convert a clear-cut chance in Edmonton — after coming on as a sub — that cost his team points. Meanwhile, Matt VanOekel won two starts and made eye-popping saves that preserved six points for his team.

MVO has yet to be named player of the week, even though he leads the league in clean sheets and should be a clear candidate for league MVP — it’s hard to find a player that’s been more valuable to his team than MVO has been for the Eddies.

“I think individual awards are overrated,” said VanOekel. “I think it’s pointless. I don’t know who makes these teams, whatever, it means nothing to the players at this club. We have one goal in mind, and that’s the championship. Getting into the playoffs. If we’re the underdogs, so be it. It plays into our hands.”

More evidence of who-is- FCE? On Sunday, in describing the Cosmos’s disappointing home draw with Rayo OKC, Big Apple Soccer editor Michael Lewis referred how the New Yorkers were in a battle with the Indy Eleven at the top of the standings, with nary a mention of FC Edmonton — who are also ahead of the Cosmos (oh, and have a 2-0-0 record against the Cosmos this season).

This Sunday, the Eddies will face a beat-up Minnesota United squad — coming off a 4-0 loss at home to Miami and with an infirmary that’s filled to the brim. If the Eddies make it nine wins in a row at home, the league could have a situation where three teams — Indy, FCE and the Cosmos — begin to separate themselves from the rest of the pack in the overall standings.

But, when will those around the league notice? Will it take a snow-swept playoff game at Clarke Field in November to remind people that, well, the Eddies actually exist?

“I’ve been here four seasons, and I think the league has always underestimated our players,” said Watson. “We’re surprised about it this year, because we have better calibre of players. But, we’ve always been underestimated, even in stupid things like player of the week, and team of the week, which we really don’t really take into account. Because some of the selections, you put your head in your hands and go ‘where did that come from?’

“No one realizes how good our players are. Only us and our fans. Were one of the top sides. We’ll continue with that mentality this year.”

For coach Colin Miller, the anonymity of the Eddies may be an advantage.

“I want it to continue that way, believe it or not. I’m not a guy who goes and blows his own trumpet, anyway. I think the players deserve an enormous amount of credit for the work that they’re doing and the attitude they show in training every day. But, we are where we are because we deserve to be here. Teams don’t get relegated because they’re good teams. Teams win leagues and get into playoffs because they are good teams. We know we have got good squad, a very competitive squad. We know we haven’t accomplished anything yet. We’re on a good run. The guys are showing a lot of belief in what we’re doing as a staff. They believe in themselves as a group.

“If you’ve supported Scotland all your life, underdogs all the way through, then I don’t mind being where we are at the moment. “

And Miller is still big on using the Leicester City example. Even in April, as the Foxes were growing their lead atop the English Premier League table, the papers were filled with columnists wondering when, not if, the bigger clubs would pass them. It never came to pass. And, the Eddies are in that situation — so many around the league are expecting a fall, even though FCE has lost just one of its seven fall-season games.

Miller said he sees a lot of similarity between the current Eddies and the Toronto Blizzard of the original NASL. Miller played for that Blizzard squad — which was one of the elite teams in the league; but he felt, as a Canadian team, the Blizzard got very little respect league-wide.

On Sunday, the Eddies will get the chance to avenge one of the black marks on the season; their only home loss in NASL play in their spring-season home opener. Minnesota won 2-0.

“It was probably the poorest game we’ve played for the full 90 minutes,” said VanOekel. “We definitely owe them something. It’s a well-coached team and very talented players. We know they’re going to come out after being beat by Miami last week.”

“They turned us over and beat us pretty well, but we were poor that day,” said Miller. “We’re on a good run — but there’s no point in us going all the way to Puerto Rico and doing what we did on Saturday night if we let ourselves down here.”