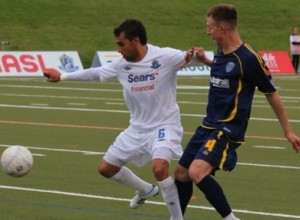 FC Edmonton’s front office looks to have made a major strategic change. Instead of looking abroad for high-priced talent as it did for the 2012 season, it has targeted proven NASL veterans to bolster its lineup for 2013.

The Eddies’ back line received a major upgrade when the team announced Wednesday that it had signed Neil Hlavaty and Lance Laing to deals.

As a member of the Minnesota Stars, Hlavaty was well-known to FCE fans through two years worth of Flyover Cup derby matches. Hlavaty is excellent on set pieces and also scores from the penalty spot. He scored two penalty-kick goals vs. the Eddies over the past two seasons.

“Today is a very exciting day in my life and career,” Hlavaty said in a release issued by the Eddies. “I’m anxiously looking forward to joining FC Edmonton and taking on another challenge. FC Edmonton is a club that I truly believe will, and should, have success in the NASL for years to come and I hope that I can play a vital role in making that success come to fruition. I’m looking forward to meeting all the players and staff in Edmonton in the very near future. Finally, I want to thank Manny Lagos and the entire staff in Minnesota. They gave me a platform to establish myself in this growing league and I head to Edmonton with great memories and friendships in the Twin Cities.”

Laing, from the Fort Lauderdale Strikers, has two caps with the Jamaican national team and was selected to the NASL’s Best XI in 2011.

“We’re extremely pleased to have both Lance and Neil onboard,” said FCE technical director Joe Petrone in the release. “Lance is an athletic, attacking left fullback with great potential and Neil won an NASL championship with the Minnesota Stars in 2011, so he’ll bring some much needed experience to our club.”

Laing and Hlavaty bring something that was sorely missing in the FC Edmonton backline — size. Both are physical players who are good on set pieces, an area where the Eddies struggled last season.

Last season, the team finished in last place in the NASL, and a good part of the blame can be attributed to the decisions made to bring in imports into key positions. While Frenchman Kevin Hatchi had NASL experience, he often struggled at left back, especially late in the season when he was regularly getting beaten down the wing. Jonathan Joseph-Augustin made key errors in the back line. And the most ballyhooed of the French imports, Serisay Barthelemy, killed attack after attack with his refusal to move the ball and his stubbornness to take on multiple defenders in lost causes. You could argue, based on the kind of hype and expectation placed on a player, that Barthelemy is currently the biggest bust to ever play for the Eddies.

So, today’s announcement is refreshing news: Instead of looking abroad for unproven talent, the Eddies have secured players who have built up solid NASL resumes. The Eddies know what these players can bring to the field.

And, with a new coach being announced Tuesday, these are signs that FCE is learning from its mistakes.