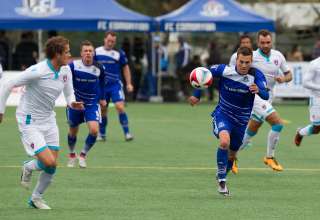 The United Soccer League — including the Ottawa Fury and the affiliates of Toronto FC and the Vancouver Whitecaps — got what it wanted.  The United States Soccer Federation — which, for all intents and purposes, directs the sanctioning of the major pro league in the U.S. and Canada — promoted USL from Division-3 to Division-2.

And, FC Edmonton owner Tom Fath was proven right; in December, when everyone seemed to have written off the North American Soccer League, he was openly confident about that the circuit would survive into 2017. On Friday, the USSF decided that NASL would keep its Division-2 status, ensuring that the league can try and recover from a challenging 2016 season.

So, in 2017, North America will have two Division-2 leagues.

Fath said the key for FCE going forward is to “build sustainability.” The Eddies have already set net off-season sales records for season tickets, and we know that a new third jersey will be introduced this season.

Fath, who has been working the phones, said that he’s relieved with the decision.

“I always felt that the was going to be the outcome, but until that decision is made, you’re never totally sure that it’s going to go a certain way.”

“I’m delighted,” said FC Edmonton coach Colin Miller. “I am really really pleased for [FC Edmonton] owner Tom Fath. He’s put in so much work, as have the other owners.”

In 2016, NASL’s Rayo OKC had an ownership meltdown that led to squabbles between the Spanish and American partners. The Fort Lauderdale Strikers ownership group walked away, leaving behind a trail of unpaid players and staff. The New York Cosmos released all of its players at the end of the season and furloughed staff. The Tampa Bay Rowdies and Fury moved to USL.

But there have been signs that the Cosmos may be saved. The San Francisco Deltas are coming into NASL as an expansion team. And, earlier this week, Peter Wilt, who is working with several potential NASL expansion groups, said he was bullish over the future of a new, revitalized NASL.

Miller admitted there was a time when he wondered what it all meant, but he kept being reassured by the FCE owner.

“There was a point where it was a bit worrying, but Tom Fath didn’t act on any of the rumours.”

Now, the coach is looking forward to talking about football – about the player announcement the club will be making in the coming weeks, about all the plans the team has going forward.

Miller said that questions about NASL were never about the quality of soccer offered by the league; that he understood that the “owners had issues that they needed to work out.”

Both USL and NASL will get waivers from USSF to be Div-2 leagues. The USSF says it will work with the leagues in order to bring up their standards, and that some further conditions will need to be met.

“The USL is honoured to receive provisional U.S. Soccer Federation Division 2 status, which provides further validation about our League’s financial sustainability, national footprint, ownership quality, stadium infrastructure and player development,” said Alec Papadakis, the USL’s CEO, in a release issued by the league. “Our teams have invested more than $100 million into stadium development in the last year to enhance the experience for the 1.5 million passionate fans that attended games in 2016, the 1,000-plus players and nearly 100 coaches that have positioned our League as a highly sophisticated competition model that cultivates strong regional rivalries.”

(Papadakis, by the way, is listed as a Canadian international in the NASL history books — he played for Atlanta in the 1970s; his brother, Nick, played for the Canadian national side).

“The NASL Board of Governors and I support U.S. Soccer’s decision to grant the league provisional Division II status,” said North Carolina FC owner Steve Malik in a release issued by NASL. “We’re excited about beginning play in April, and we look forward to the continued growth of our league and soccer in the U.S.”