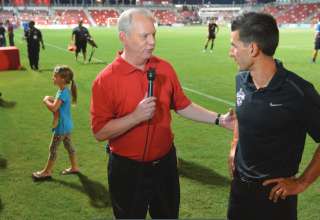 Alen Marcina, left. PHOTO: NASL
Coach Alen Marcina is just one of many connections the San Antonio Scorpions have with the Great White North. Can we call a team based in Texas our own? Damn straight we can!

There’s just something so uniquely Canadian about watching a soccer team practice on a turf eld located near a suburban street named for an Olympic mogul skier.

Three minivans show up in the parking lot of the Fuhr Sports Park, located on Jennifer Heil Way in Spruce Grove. For those not familiar with Alberta’s capital region, it’s about 20 minutes west of Edmonton on the Yellowhead Highway.

It’s a muggy summer Saturday, and the San Antonio Scorpions need to practise ahead of an NASL encounter the next day against FC Edmonton. With Clarke Stadium, FC Edmonton’s home, unavailable on Saturdays, coach Alen Marcina takes his crew to Spruce Grove. The team arrives in three minivans, with Marcina at the wheel of one of them.

The players get out of the vans and cross the parking lot to the field.

For anyone who might have been looking from the Superstore parking lot across the street, they’d see a team with black Nike kits and think nothing special was going on. Just another men’s team. But a sharp-eyed Canadian soccer fan might recognize the tattooed frame of Eric Hassli, the former Vancouver Whitecap and Toronto FC designated player, crossing the lot. That fan might even notice former Whitecap Greg Janicki or Julius James, who was once a first-round Major League Soccer SuperDraft pick of Toronto FC.

And that fan might recognize Canadian national-teamer and former TFC player of the year Adrian Cann. Or Shaun Saiko, the Edmonton-area native and the all-time leading scorer in FC Edmonton history.

These players have someting in common. They’re cast-odds. Some are players who have reputations for being difficult in the dressing room or for amassing cards.

The ringmaster is Marcina. At the start of the season, the talk amongst NASL pundits was how Marcina, just 34 years of age entering the 2014 campaign, would be able to control a dressing room lled with players who had reputations for playing for the names on the backs of their shirts, not for crests over their hearts.

As we near the end of August, the Scorpions lead the fall-season standings, and are battling Minnesota United for the best overall record in NASL. So much for the San Antonio implosion. And Marcina has gone from being “huh, he’s Canadian?” to a man who might be someone you could envision coaching in our national program sooner rather than later.

And Marcina won’t even entertain the notion that some of his players are, or were, bad apples.

“I’m a big believer that it’s about the environment and the culture that you create for the guys,” he says. “We set from day one our expectations and standards. A lot of these guys may have been misinterpreted. They are still winners. They want to win. I knew, collectively, if we all came together and stayed focused on our goals, we’d experience some success.

“No, I knew if I was able to do the right things, nd the right guys, the right staff, that if we could just stick to the plan, that things would go well. So far, they have. So far, being on top at the midway point, that’s a good indicator, but there’s still plenty of games left.”

One of Marcina key acquisitions was Cann. The Canadian defender was Toronto FC’s player of the year for the 2010 season. But, after a contract dispute in 2011 — in which he was forced to issue a public apology to fans and the organization after leaving training camp — Cann then suffered a series of knee injuries. His playing time diminished and he was released after the 2012 season.

In 2013, Tim Hankinson, San Antonio’s head coach at the time, asked Cann if he’d like to join the team. Cann says he was also in talk with Rochester of the USL and MLS’s Chicago Fire.

But, instead, disappointed that the Reds had decided not to pick up the option in his contract, he decided to take some time away from soccer.

The Scorpions got o to a brutal start in 2013, and Hankinson was fired. Marcina was promoted to the role of interim coach. After the campaign, the interim tag was taken off. Marcina had spent years in the lower divisions of North American soccer, and had played with Cann in Vancouver. He decided to extend another invitation to Cann.

“Last year, I was supposed to come to San Antonio,” Cann recalls. “But, I decided to take some time away from the game to reassess where I was at and then, eventually, a year went by. I was doing my own training at the time and Alen had reached out to me, we had played together in Vancouver, and said ‘would you consider coming to help the guys out?’ And I thought, yeah, I still had the urge to play and win a championship and eventually made the commitment.”

The fact that he knew Marcina from their time together with the Whitecaps was the deal-cincher.

“I knew what he was about, his mentality, his work ethic. I stand by that, the quality of everything he does. I wanted to be part of an organization that resembles that. I thought it would be a great fit for me to go down there, to re-establish myself, playing wise, and eventually win a championship. It was appealing to me.”

And, even though Toronto FC decided not to pick up the option on Cann, and the relationship between player and the front office wasn’t always rosy, he looks back at his time playing at home as a positive.

“Moving back to Toronto, for me, was a dream come true. I was always away from my family, my friends, my whole career, starting from university [Cann played soccer at Louisville]. Having the opportunity to play in front of my friends and family, just being in Toronto, was a really nice thing. It felt really good, for once. The fact that I received that injury on my knee, came back, did my rehab, got back into the thick of things, then eventually, my third year with the team, I was disappointed they didn’t pick up my option year. But it is a business, and I just needed time to assess where I was at, to see if I had passion for the game. I didn’t want to commit to a team knowing that halfheartedly I’d be part of an organization and not giving it my all. I needed that time away, to see if anything else caught my eye.”

Saiko came to San Antonio after he was cut loose by FC Edmonton in 2013, after a season of turmoil which saw FCE’s all-time leading scorer sent to play with the reserves squad by Head Coach Colin Miller. Saiko’s time in San Antonio hasn’t been easy. His playing time was curtailed by injuries; during the spring season, he went under the knife to deal with a double hernia.

When the Scorpions arrive in Edmonton, Saiko is trying to work his way into the starting lineup, and he’s got good things to say about his coach.

“I think he had a plan for himself as soon as he stopped playing. He came over to San Antonio to become the assistant coach behind Tim Hankinson at the time. He’s fulfilling his plan, he’s coaching his own academy and now he’s coaching the San Antonio Scorpions.”

But, two days after the interview, the release will go out to the media that Saiko has been cut by the Scorpions. The reason will be all to familiar to Canadian soccer fans; on an American team, Saiko takes up an international slot on the roster. And, after the Scorpions acquire Costa Rican César Elizondo from the Carolina RailHawks, they now have eight internationals on the team — and league rules state you can only have seven. Unlike MLS, you can’t trade for an extra international roster spot. So, someone has to go, and it will be Saiko, who draws the short straw. If there is any silver lining, it’s that Saiko is expecting a daughter with his partner, Erin Bennett, who had remained in Edmonton. Saiko can now be with her full-time.

It’s an example of the tough decisions a coach has to make. And, even though he still has more than five years to go before he hits his 40s, Marcina has proven he can be both the pragmatist and the players’ coach.

Miller, who has coached the national side on an interim basis, says he has nothing but admiration for the work Marcina has done with one of FC Edmonton’s rival clubs.

“What he has done there has been fantastic. And, outside of maybe you and me, nobody knows that he’s Canadian.”

Marcina is just fine with the fact that most Canadian soccer fans don’t know that much about him.

“It’s OK. If you say I am a young coach, that I have to bide my time as well, but I am confident in my abilities and my staff’s abilities. If we continues to do the right things, that’s all I’m concerned about. I don’t care if they know who I am or they don’t.

“My job is to win games and to put a successful program together.”