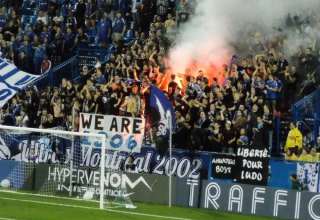 The Montreal Impact got its CONCACAF Champions League campaign of to a positive start, capturing the opening group-stage match against San Jose by a 1-0 score in front of just over 15,000 somewhat soggy fans at Saputo Stadium.

Playing a first half under rains that ranged from slight showers to monsoon-like, the home side scored early, survived a dangerous penalty kick and, while not holding the advantage in terms of ball possession, did manage to reach the interval holding a lead that stood up for the rest of the match.

Showing particularly well for the Impact was recently acquired midfielder, Hernan Bernardello, who started the game, getting his first minutes in his new uniform.

The 26-year-old Argentine midfielder, who earned his first applause of the evening for heading away an Earthquakes shot in the seventh minute of play, worked from box-to-box in this evening’s game, stopping enemy forays effectively and turning the ball up the field on the counterattack. His passes invariably found their desired target time after time with 50 minutes elapsing before a first one went astray.

The new man was at the origin of the only goal scored in the match, coming in the 16th minute off a 30-metre free kick. Bernardello’s accurate shot found the tallest man in front of the San Jose net and Hassoun Camara headed it into the Earthquakes net behind David Bingham.

“You can tell he is a very good player,” said Impact head coach Marco Schallibaum after the game. “He played a great game and I’m happy to have a player like him on the team.”

San Jose gaffer, Canadian Mark Watson, sent out a lineup that was a little lean on front-liners.

“We had to do what was best for our club. We’ve played three games in eight days,” he said before mentioning that the lineup Schallibaum sent out came as a bit of a surprise. “We didn’t expect them to field their A-team.”

Asked if the slick surface may have contributed to his team’s loss, Watson admitted, “The rain makes it a little slick and sometimes your first touch rolls away, but it was the same for both teams.”

Evan Bush, playing his first minutes with the front liners since defeating Vancouver for the Canadian Championship in late June, took his turn in the spotlight 10 minutes after play got underway. A penalty called on Collen Warner led to an Alan Gordon penalty. The San Jose forward’s stutter-stepped and sent the ball towards the corner of the Impact net but it was corralled by a leaping Bush before it could find the mesh.

Bush became a first-time father since the team last took to the pitch.

“It feels good to get the first win,” Bush said in the mixed zone that followed the game.

Asked what effect stopping the shot from the spot had on his teammates, he replied, “it gives the team a lift. If they get a goal it gives them some breathing room.”

The rain came to an end as the whistle blew ending the initial 45 minutes and did not return for the second half, played under much drier conditions.

San Jose came out strong and held sway in the early part of the second half but only Montreal managed a shot on goal.

Watson brought in some of his front line players as substitutes, with Sam Garza replacing the injured Marvin Chavez as the opening half came to a close. Garza took a feed from Jaime Alas in the 52nd minute but the Texas native’s header was bounced off the crossbar.

Reigning MLS MVP Chris Wondolowski came on for Ramiro Corrales in the 69th and Walter Martinez spelled Adam Jahn in the 82nd.

As the match got down to its final third, Montreal had a number of kicks at the can but was unable to capitalize on the opportunities. In the 65th, Justin Mapp took a corner for Montreal, and a second when the first was sent out of play.
Seeing the ball returning to his feet, the Mississippi-born midfielder curled one in to Matteo Ferrari, who wore the captain’s armband for Montreal tonight. The Italian defender sent his header off the bar.

In the 68th Bernardello got the ball to Romero in the box but an alert David Bingham managed to prevent the doubling of the Impact lead. Di Vaio and Bernardello would combine on a similar play in the 84th, with an identical outcome.

San Jose got the final opportunity of the night in the 86th, a Martinez roller from just outside 18 metres that popped up and over the woodwork to preserve Bush’s clean sheet.