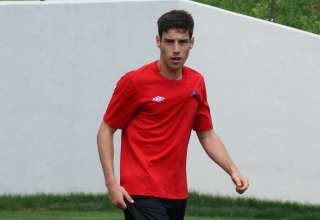 Another Canadian looks to be set to become an MLS player.

Regina, Sask.’s Drew Beckie, who starred in the midfield at the University of Denver and also featured for the Ottawa Fury, tweeted Tuesday that he’s inked a deal with the Columbus Crew.

“Proud to announce I’ve signed with @Columbus Crew, been in the works for a bit but ill be wearing #22 thank you to the Crew,” he announced via Twitter.

Beckie was a late addition to the MLS combine, and showed well on a team that also featured Canadians Kyle Bekker and Emery Welshman, who were both selected in the first round of the draft by Toronto FC. Beckie, who played with Canada’s U-23s at last year’s CONCACAF Olympic qualifying tournament, was a second-round choice of the Crew.

Beckie played in two matches at the Olympic qualifiers.

It’s always a notable achievement when anyone drafted outside of the first round is signed to a deal — as anything from the second-round down is often a crapshoot for MLS teams.