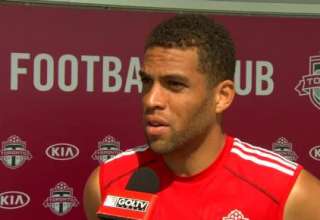 Veteran English defender Darel Russell has only been a member of Toronto FC for a few weeks, but he joins an ever-growing list of Reds’ players whose late-game mistakes have cost the team points.

Since day one of this franchise’s existence, finishing off games has always been a major issue for the club. Late goals to turn wins into draws. Late goals that turn draws into losses.

Jose Villarreal’s injury-time reverse-scissor-kick goal gave the Los Angeles Galaxy a 2-2 draw with TFC in its 2013 BMO Field-opener. But the goal was set up by an awful defensive-header attempt by Russell, who was first to a ball in the TFC area, but sent it right into the middle of the box rather than away from danger. Villarreal, who came in as a second-half sub, punished the mistake.

Russell, who got the start at right back, with Richard Eckersley moving to the left side, was also exposed on the first goal of the match. Early in the first half, he allowed Mike Magee to get ball side, goal side of him on the far post. Magee then smashed home the ball Marcelo Sarvas placed across the penalty area.

TFC coach Ryan Nelsen was quick to defend the defender.

“I think Darel (Russell) did well.There are some days where things happen and that’s luck but his endeavour and he worked really hard. He never stopped and I think he did fine,” Nelsen was quoted after the match. “Those things (2-2 goal) happen. He was in a good position, he just tried to clear it and it got him caught. Unfortunately it fell onto one of their guys. Could have fallen anywhere and have been cleared but that’s football. That’s life; we move on and learn from it.”

The defensive errors overshadowed some bright TFC bright spots. Brampton, Ontario’s Jonathan Osorio got his first-ever MLS goal in the second half after coming on as a sub. Luis Silva, who came on in the second half to make his 2013 debut for the Reds, held off Galaxy defender Omar Gonzalez, then slid a ball across that Osorio got just enough purchase on in order to score.

But, there is a a glass half-full side of the argument for TFC supporters. While the team coughed up a late goal once again, it could be argued that the Reds were luckly not to be dead and buried 25 minutes in. After Magee’s goal, the Galaxy came at the Reds in waves, with Michael Stephens on the left wing and Sean Franklin on the right giving the fullbacks fits. Franklin’s 20th-minute cross found an unmarked Magee, and TFC keeper Joe Bendik was forced into a ridiculous, diving stop. Without Bendik’s heroics, TFC goes down 2-0 20 minutes in and likely suffers a psychological kill shot.

Eight minutes after Bendik’s save, TFC’s resurrection was complete. Galaxy defender Leonardo showed us why he doesn’t normally play there, as he made a lazy pass into the middle of the park, which TFC forward Robert Earnshaw took happily. But Galaxy keeper Carlo Cudicini compounded the error. For some reason, he thought he could dash 40 yards off his goal line and beat Earnshaw to the ball. Earnshaw won the race easily, and lobbed the keeper with his left foot. Out of nothing, TFC had levelled th score.

The Galaxy, playing without injured Designated Player Robbie Keane, no longer could push into TFC territory with ease, and the goal looked to relax what was tight back line. The rest of the half saw a series of half-chances, with TFC’s Reggie Lambe getting the best opportunity — but he wasn’t able to get a shot on goal from a tight angle off the left side.

Landon Donvan, the American soccer poster boy, returned to the Galaxy lineup Saturday after a prolonged rest. He came on in the second half and promptly showed off his rust. He was able to slip through TFC centre backs Darren O’Dea and Danny Califf for a clear chance on goal, but his shot, was a harmless grass cutter right at Bendik.

Donovan wasn’t a factor in the match after that.

But, TFC doesn’t need players from the other team to be influential. Because this club has shown time and time again that it doesn’t know how not to press the self-destruct button.