January 23, 2022
9 New Articles
Home MLS Vancouver Whitecaps Russell to the rescue: Canadian has game to remember for the Whitecaps 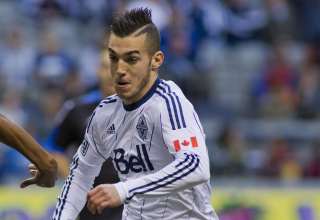 The seven-game MLS winless streak is finally over for the Vancouver Whitecaps, thanks to a two-goal performance from Canadian youngster Russell Teibert, who scored his first professional goals.

And the Whitecaps did it against the defending MLS Cup champion Los Angelees Galaxy, a team they had previously failed to beat in five prior matchups, defeating the visitors 3-1 at BC Place in front of 21,000 fans.

The Niagara Falls, Ont. native hit a cracking left-footed effort in the 63rd minute after a nice set-up from Nigel Reo-Coker, curling his shot from outside the area past a sprawling Carlo Cudicini.

The 20 year old then followed that up by bursting through into the area 13 minutes later, to finish a play set up by Gershon Koffie, who cut back near the endline before passing into the path of Teibert.

“It’s a blur,” Teibert said of scoring his first goal. “I don’t know what I was thinking. I was just overwhelmed.”

Teibert’s family were in attendance for the goal, and afterward he dedicated the sponsor’s man of the match award he took home to his mom for Mother’s Day.

He nearly didn’t play at all though — he looked set to watch the match himself from the bench until Daigo Kobayashi was forced to withdraw in the 14th minute due to a calf strain.

The match also signalled the end of Darren Mattocks’ goal drought, as the Jamaican scored a stoppage time goal with score at 2-1 to seal Vancouver’s win.

It was only Mattocks’ second goal of the season, after going five MLS matches without finding the back of the net.

“He took his chance and now hopefully that’ll give him confidence he can get on a bit of a run now and get the momentum and the belief.”

Mattocks scored his goal moments after missing a gilt-edged opportunity and dramatically falling to his knees in frustration.

After Gyasi Zardes had scored his first MLS goal to bring the score to 2-1 in the 86th minute, the importance of that opportunity was heightened – but, as Reo-Coker had suggested, Mattocks got back up and was ready when the ball came to him in stoppage time.

“I played for 93 minutes,” Mattocks said. “Obviously I missed in the 92nd minute, and I thought, with one minute left, probably it’s not going to come. But I mean, that’s why I was there – I was optimistic and that’s why I got the goal.”

This win comes at an ideal time to build some momentum ahead of the Canadian Championship final against the Montreal Impact. The first leg takes place on Wednesday at Stade Saputo and the club now hopes ending their MLS struggles can carry on into that cup competition.

“Now we have to use that as momentum to be a season changer for us and continue to grow as a team and try and achieve what we want to achieve this year.”