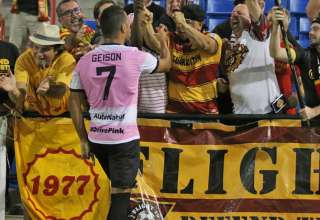 The weather was fit for, well, maybe a Kraken.

The game was played in a south Florida rainstorm that, at times, intensified to the point where the wind was howling and the drops looked like ocean spray coming down on the players. So, with a heavy field, maybe it was all well and good that FCE coach Colin Miller chose to rotate his squad.

Even though the Eddies were playing their game in hand on the first-place New York Cosmos, FCE sat several regulars after Sunday’s win over Tampa Bay that clinched a playoff spot. Left back Adam Eckersley served a suspension for yellow-card accumulation. Winger Dustin Corea and forward Tomi Ameobi didn’t start. Shamit Shome started the game on the bench. And NASL single-season clean-sheet record holder Matt VanOekel didn’t start in goal for the first time this season. Captain Albert Watson wasn’t in the squad, let alone the starting XI.

Watson took a couple of big blows to the head in Sunday’s win over Tampa Bay.

The understudies were victimized in the first half. Moura beat his marker, fullback Allan Zebie, to a cross launched by former Toronto FC defender Julius James. Moura sent his headed-effort goalward; keeper Tyson Farago, playing for the first time this NASL season, leapt and got his hand to the ball, but couldn’t keep it out.

A few minutes later, Moura should have doubled the home side’s lead; he was able to skip past centre back Karsten Smith, starting in Watson’s place. Moura was in alone on Farago, but his chipped effort went well wide.

The weather got progressively worse as the first half went on, and the game descended into war of attrition — as the scoring chances began to wane and the teams struggled to come to terms with the wind.

The Eddies didn’t allow the Strikers any real great scoring chances in the second half, but the visitors weren’t able to generate much to threaten the Fort Lauderdale goal. The Eddies finished the night with two shots on target, while the Strikers got four on Farago’s net.

“I don’t think we deserved to lose, I didn’t think that Fort Lauderdale was that much better than us on the night tonight,” Miller was quoted after the game. “We didn’t create enough chances, our final ball wasn’t there and we didn’t defend the cross well on the goal. The players put in a good effort, but overall we fell short on the night.”

Miller said an issue FCE faces when it tries to test the depth of the squad is that many of the reserve players don’t see enough competitive matches. While some of the other NASL teams can find leagues or exhibition games for their reserves, FCE’s players need to rely on training sessions.  “We don’t have the quality in the Edmonton area to give them competitive games,” the coach said.

“I’m just disappointed that we come off the high of Sunday (the playoff-clinching win over Tampa Bay). The attitude was great. We spoke about them playing the ball forwards far, far more in the second half and ,once we started to do that, we put them under serious, serious pressure.”

So, the Eddies remain five points behind the Cosmos in the race for first place in the NASL fall season. The Cosmos and Eddies each have three games left. But it would now take nothing short of absolute craziness for the Eddies to escape the No. 3 seed. It looks as if FC Edmonton will visit the Indy Eleven (guaranteed a minimum of a No. 2 seed because of its spring season title) in the first weekend of November for a Championship Semi-Final.

But, with the Eddies needing to labour through a heavy schedule near the end of the season, and with the post-season looming, managing the roster took precedence.