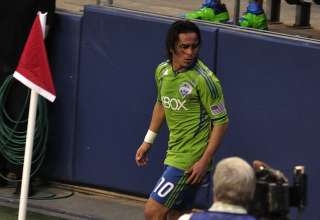 Looking back at the week that was in Major League Soccer, one game stands out above all others — Seattle’s 4-3 win over the Colorado Rapids was a wild affair that had the throngs of fans in the Emerald City on the edge of their seats.

Mauro Rosales, who scored a goal and added an assist, was voted the MLS Player of the Week by the members of the North American Soccer Reporters on Monday.

The standout player from the standout game of the weekend got the nod in the vote. He’s the second Sounder in a row to win the award, as Fredy Montero won the balloting last week.

How The 11 voted: Rosales got the nod, but was he the player who was the most valuable to his team this week? We didn’t think so. The 11’s vote went to Portland Timbers’ keeper Troy Perkins.

The Timbers got their first MLS road win in franchise history this weekend in the Chicago suburbs, and Perkins made a series of fantastic diving stops late in the game to preserve the win. Fire star Marco Pappa is likely still talking to himself after Perkins robbed him twice.

Perkins was directly responsible for the Timbers’ hanging on to a 1-0 win. But that game didn’t get the widespread attention of the Seattle-Colorado 4-3 see-saw battle.