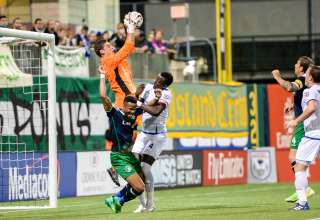 Soccer can sometimes make you sit back and scratch your head. FC Edmonton scored just five goals in its first nine games of the NASL regular season. So, of course the Eddies would score four on the road against the New York Cosmos.

Sure, the Eddies scored two of them after the Cosmos went down to nine men. But, maybe, Wednesday’s 4-2 win can jumpstart what has been, up to now, a disappointing campaign for the Eddies.

“I think the most important thing was the discipline we showed,” said FCE coach Colin Miller. “Our players reacted so positively to everything and played well. I’m disappointed in the goals we gave away tonight, but goodness me I’m proud of these players because Saturday in Puerto Rico was the lowest I’ve been in my career and at the club in a long, long time. We watched the first half of the Puerto Rico match, had a good training session and changed up the system as well and the players all responded very positively tonight.”

Maybe this was just a bit of karmic payback for the Cosmos scrambling to postpone their May 21 home date with the Eddies just so the New York side could jaunt off to Saudi Arabia for a friendly. Prioritizing a friendly over the league — and giving less than two weeks notice that you want to rejig the schedule of the only Canadian team in the league — well, that’s bad karma times a million, right? Wednesday was the make-up date for that postponed match, and boy did the Cosmos do their part when it came to making things up to the Eddies.

The Eddies went with Canadian Nathan Ingham in goal, who made his NASL debut. Ingham replaced  Chris Konopka. Attacking midfielder Dean Shiels, fullback Netan Sansara and captain Nik LEdgerwood were all unavailable due to injuries. And Adam Straith was gone for national-team duty. So, the Eddies looked a much different side than the one that crashed and burned in Saturday’s 3-0 loss to Puerto Rico.

The Eddies went into halftime of this one down 1-0, as centre back Pape Diakite lost Irvin Herrera in the box. Herrera punished the slack defending by heading a cross from Ryan Richter into the goal. One goal was the least that Herrera deserved, as he could have had a hat trick by halftime, but Ingham came up big a couple of times earlier in the 45.

“[Ingham] had one or two wobbly moments but I thought overall he handled the occasion well,” said Miller. “Having your first game against the New York Cosmos, I was happy with his performance.”

But, considering how bizarre the second half would be, the first half, well, it was simply an opening act.

In that second half, it was the Cosmos backline that became awfully shaky — and looked like it was badly missing Dejan Jakovic, who is with the Canadian national side. Sainey Nyassi equalized, beating two Cosmos defenders to a high, floating cross and heading the ball home.

Then, the Cosmos got caught ball-watching. The ball went into the box and Tomi Ameobi beat two Cosmos defenders to it, cushioning a header for Mauro Eustaquio, who made his second straight start after spending most of the season on the sidelines. No one on the Cosmos moved, as Ameobi found a dead spot in the penalty area. Eustaquio rolled to the ball into Ameobi’s path, and the striker smashed the ball home.

The game continued on at a breakneck pace. New York’s Darrius Barnes, marked by Diakite, leapt for a ball that was corralled by Ingham. As the keeper played the ball away, Barnes and Diakite came together. The cameras didn’t catch the incident, but Canadian referee Geoff Gamble sent Barnes off. The charge? That he lashed out at Diakite.

“Things happen so quickly and I actually didn’t see the incident with [Diakité] but the players on the bench said [Barnes] had a genuine kick-out, which was great for us because it broke up their back four and we knew that they were struggling at centre-back,” said Miller.

The Cosmos, down to 10, had to press forward in search for the equalizer, and Diakite had to scramble to clear Eugene Starikov’s effort off the line. The Cosmos attacker beat Ingham to a ball just outside the area, and nearly punished the young keeper for being too late to come off his line.

But then a moment of madness from Juan Guerra sent the already shorthanded Cosmos down to nine men, as he headbutted Eustaquio right in front of the ref. Guerra complained to Gamble, claiming Eustaquio had made a meal out of the incident. But, embellishment or not, there was no denying the initial foul — that’s a red card every time.

Up two men, the Eddies piled on. First, Dustin Corea set up Jake Keegan to make it 3-1; then, a giveaway in the Cosmos backline allowed four Eddies to go into the box, with only keeper Brian Holt to beat. Ameobi got the goal that FCE just had to score in that situation.

Crazy as this game was, the Eddies, despite being up two men, managed to yield not one, but two (!) penalties in time added on. Javi Marquez couldn’t convert his penalty, but then a foul was called in Eustaquio in the ensuing scramble, and then Ayoze went to the spot to make it 4-2, capping off one of the most bizarre halves in Eddies’ history.

But, as weird as it was, the Eddies will take it. You could argue that, forcing a postponement of a league game so they could go to Saudi Arabia should have cost the Cosmos a forfeit of their spring-season home date with the Eddies. But, thanks to some ill-advised fouls and some really poor defending, well maybe it was like the Cosmos forfeited, anyway.