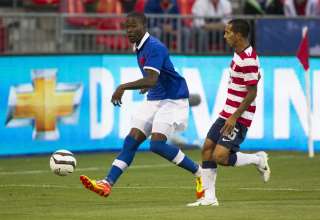 The fact that Tosaint Ricketts faces a lengthy spell without club soccer is distressing to national-team coach Stephen Hart.

“It’s a major concern,” said national-team coach Stephen Hart in a conference call on Thursday. “But it’s in FIFA’s hands at the moment.”

Ricketts, who has been a fixture on the Canadian roster during this World Cup qualifying campaign, has been stymied in his attempts to get a deal with Bundesliga 2. side Dynamo Dresden. Even though Ricketts said the Romanian Football Federation gave him permission to leave Politehnica Timisoara after that club had failed to pay him for at least five months, German magazine Bild reported Wednesday that the Romanian Football Federation is demanding a loan arrangement or transfer fee if Ricketts wants to move to a new club, a move which brings his career to a standstill. This may be a battle he will need to take to FIFA, much like Canadian Josh Simpson had to do when he tried to leave Manisaspor once that team failed to meet its financial obligations to him. Simpson launched his case in August 2011 and had it resolved in January, 2012.

In the meantime, Hart said, “to keep Tos in shape, I will do whatever I can for him.”

And that means if Ricketts is unattached when Canada faces Trinidad and Tobago on Aug. 15, he will likely get a call so he can get some meaningful game action.

But Hart was clear there is little the Canadian Soccer Association can do to intervene on Ricketts’ behalf. Ricketts had enjoyed an impressive trial with Dynamo Dresden, scoring four times in three friendlies — and was working on finalizing a deal with the German side.

“Things are getting sorted, just a matter of time… sooner the better,” Ricketts tweeted Thursday morning.

Hart also said two players who didn’t get called for the last round of World Cup qualifiers — Patrice Bernier and Terry Dunfield — have both really impressed him with their work in MLS. When asked if Bernier, who now leads the Impact with six goals, is in the mix, Hart answered, “definitely.” And he also said Dunfield, who is now a fixture in Toronto FC’s starting XI, is making a push for a Canada recall.