January 20, 2022
9 New Articles
Home Global Game CONCACAF Results are in: Canada will just need a draw against Nicaragua to advance at U-20s 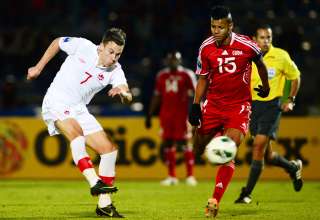 All Canada will need to do is get a draw with Nicaragua Friday to get into the quarter-finals of the CONCACAF U-20 Championship.

On Wednesday night, Cuba got two goals from Daniel Luis Saez and a cherry-on-top marker from Maykel Reyes as it routed Nicaragua by a 3-0 count. That win establishes two things: a) That Cuba will win Group B, leaving Nicaragua and Canada to scrap it out for the second spot in the quarters and b) That Cuba is officially THE surprise team of tournament.

Both Nicaragua and Canada enter Friday’s final Group B match with identical won-loss records. But Canada goes in with a -1 goal difference, while Nicaragua is a -3 (we can thank Cuba for laying a bigger beating on Nicaragua than it did on Canada). So, a draw will be enough for coach Nick Dasovic and his Canadian charges.

But, if Canada can get that result it needs against Nicaragua, it can only climb as high as second in the group — meaning it will face the team that wins the Costa Rica – U.S. grouping. Really, it’s a case of pick your poison.

And, if Canada’s midfield, fullback and central defence play doesn’t improve greatly over the tournament opening 2-1 loss to Cuba — even if it’s good enough to squeak out a result against Nicaragua — then a game against either Costa Rica or the U.S. could be too much of an ask for this group.