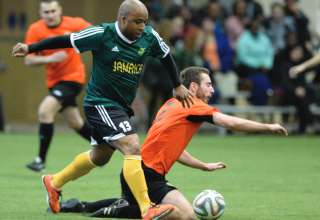 When you think of Saskatchewan and sports, you think about football… the other football, that is. But, when former Canadian national-teamer Kevin Holness returned home to Regina after his professional playing days were done, he helped rekindle a city’s love for the game of soccer

The stands are completely full as are the standing areas. People are chanting, cheering, banging drums and other noisemakers, waving flags and wearing their countries’ colours. The game on the pitch is intense and the synergy between game and fans threatens to sweep the place away.

It is easy to forget this is Regina.

And, if you could tear your eyes away from the spectacle, you might notice, on a mezzanine above it all, a guy in a Gatsby cap inconspicuously leaning on the railing. This is the figure of Kevin Holness, the architect of the pandemonium below. The venue is the Regina indoor soccer facility, the game is the final of the WCP Cup, and the tournament is Holness’ attempt to recreate some of the inspiration that fed his career.

Holness’ career was one that is incongruous with a Regina upbringing. After immigrating to the city from Jamaica with his family at the age of  four, Holness eventually found his way onto Saskatchewan provincial teams, all of the levels of the Canadian men’s national team setup, and several of the more well-known Canadian professional soccer clubs such as the Winnipeg Fury, Toronto Blizzard, Montreal Impact and the Vancouver 86ers. He cites numerous factors that contributed to his success: Growing up in a primarily immigrant community where he and his friends would play soccer on the streets and in the parks every spare moment; a father who helped him dissect every game he played; a number of talented coaches; lucky incidents which brought him to the attention of the Canadian Soccer Association. He talks in depth about his level of commitment but modestly downplays his natural talent, certainly also a factor.

Holness grows most animated though when discussing the atmosphere at Mount Pleasant, a local Regina outdoor soccer facility.

“Every Saturday all of the big teams would play at Mount Pleasant. They were teams that represented particular communities or ethnic groups. All of the families would go… people planned their entire weeks around Mount Pleasant on Saturday… people would fill the small stands and sit around on the grass… the kids would ring the field. And all I wanted to do was to pull on that jersey and play on that field with the older guys from my neighbourhood, my relatives and friends. All I wanted to do was to be good enough to earn that honour.”

Mount Pleasant was more than just a soccer pitch for Holness. It was a small community’s centre of soccer culture and an inspiration for a soccer-obsessed young boy.

Several years later, Holness returned to Regina as his pro career was winding down to find the former Mount Pleasant atmosphere and culture to have mostly disappeared. Almost immediately, he launched plans to recreate it.

Taking inspiration from a “Mini World Cup” he had witnessed in Edmonton while playing the indoor pro game with the Drillers of the now-defunct National Professional Soccer League, Holness pitched an idea to his friends in the local soccer scene. Regina should host its own mini World Cup during the period between the end of the indoor season and the start of the outdoor season, while players were waiting for the pitches to thaw. Some were enthusiastic, but most felt that it wouldn’t go anywhere.

Holness decided to name the tournament the World Class Players Cup after the name of his old DJ-ing group from his youth.

After booking Regina’s indoor facility for a few hundred dollars, scraping together seven teams to represent various countries, and putting together a schedule, the tournament at least would be a go. This was when the first surprise hit. As Holness was driving to the indoor facility he got caught in a traffic jam at the entrance to the parking lot. Having no idea what was going on, he went in to find the centre jammed with fans.

The first tournament went by in a flash. The indoor facility, an old run-down building cobbled together in a former curling rink, could hardly hold the people. The April warm-up had melted the snow and it was constantly leaking through the roof and onto the playing surface. Holness and his organizers would have to mop the water up during breaks in games. Nobody cared. People came out in droves, cheered and chanted until the last whistle, and the tournament was an overwhelming and completely unexpected success.

The energy in the air still exists, if not significantly amplified. Holness and others who have stuck with him are still there, and even some of the original players are still there. The current Regina indoor facility is a full artificial pitch, brand new this year. From the original single pool of seven men’s teams, there are now  22 men’s teams, 12 women’s teams, and an array of U-12, U-14, U-16, and U-20 teams for both males and females. The original tournament lasted less than a week but the most recent version ran from April 3-26, 2014. The tournament features regularly in the local news and has begun to draw players from other parts of the country.

Just as important to the tournament’s growth is what it provides the soccer community in Regina. The tournament is the highlight of the soccer year, draws thousands of fans, and reestablishes the inspirational soccer culture that Holness experienced at Mount Pleasant during his development. There are hundreds of kids ringing the indoor facility, watching their older relatives and friends play in the big game, and then going on to play in the same tournament in the U-12 or U-14 draw.

It will only be a matter of time before another player is sitting down for an interview and cites the culture of the WCP Cup for providing the inspiration to play professionally or to make it to the Canadian men’s or women’s national soccer team. And, when it happens, it will be because of the inspiration that Holness has given back to Regina.

“We’re starting to see a lot more kids stay in club soccer because of the WCP Cup and their experience in the WCP Cup. I’m not saying it’s us keeping kids in soccer but it’s their drive to have that kind of competition and play in that kind of environment … If you’re a 12-year- old kid lining up for the final and hearing your team’s anthem in front of 2,000 people that are chanting and singing and playing drums … where are you ever going to get that?”