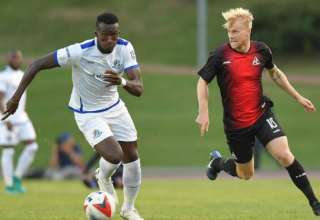 Tonight, I don’t have to write that a “controversial” call decided a game involving FC Edmonton.

Last week, when referee David Barrie took what looked to be a legitimate FC Edmonton goal off the board, well that was controversial. Because the referee called a push in the box, well there’s a level of interpretation to that. You can say he’s right, you can say he’s wrong, but there’s a grey area.

But, on Saturday night, referee Daniel Radford just got it plain wrong. To call a hand-ball in the box, you need to have an essential ingredient: The ball has to make contact with the arm or hand of the offending player. That’s the first step — before you even try to begin the internal debate of if it was ball-to-hand or not.

Radford gave the host San Francisco Deltas a 40th-minute penalty kick that Devon Sandoval converted to give his team a 1-0 win over FCE. Radford fingered FCE defender Pape Diakite for handling the ball in the penalty area.

Problem was that the ball hit Diakite squarely on the chest. It looked like that in real time, and it was clearly shown on replay after replay.

There is no interpretation there. It’s not “controversial.” It’s flat-out wrong.

And it makes for the second straight FC Edmonton game where we are talking more about the ref than we are about the players on the field.

Still, FCE need to assess some of the clear-cut chances that weren’t converted. Early in the match, thanks to a mistake from Deltas defender Patrick Hopkins, Sainey Nyassi went in clear on goal, with Dustin Corea as an escort. Deltas keeper Romuald Peiser charged off the line and stopped Nyassi’s shot. But, really, as soon as the keeper comes off the line, Nyassi needs to play a ball to Corea, who would then had an open net.

Hopkins then lost a battle with Eddies striker Tomi Ameobi, who flashed his shot just wide.

Then, a cross from FCE’s Mauro Eustaquio caught the wind and came off the bar.

The Eddies could have been a couple of goals to the good before the referee’s error. And Miller admitted that, as harsh as the call was, the Eddies are culpable for not being able to convert in front of the opposition goal.

“It was never a penalty, but it is what it is,” said Eddies coach Colin Miller. “But we can’t miss chances like that and expect to get anything out of games. We could have been 5-1 at the end of the first half. I am pleased we are creating the chances, but we need to start taking them.”

After the halftime break, Eddies keeper Nathan Ingham had to make a couple of excellent saves to keep the game at 1-0, first leaping to stop a curling effort from Pablo Dyego, then diving to stop an effort from Danny Cruz.

Adam Straith had the best chance to equalize. Off a corner kick, he was left unmarked on the far post, but nudged the ball just wide.

Sandoval had a chance to get his brace but, after the Deltas’ attacker rounded the keeper, Pedro Galvao got back to clear the ball off the line.

In the end, the bad call is what separated the two teams, and the two Canadian coaches, Miller and SF’s Marc Dos Santos, had to be separated as they had a heated exchange after the final whistle.