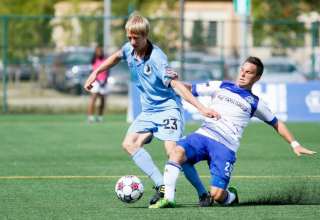 Chad Burt in action vs. the Loons.

On Sunday, the nearly 2,800 fans announced at Clarke Stadium were treated to a battle of likely NASL MVP finalists.

On the Minnesota United side, Christian Ramirez, the runaway league leader in goals scored, with 13. On the FC Edmonton side, Lance Laing, the best left-sided player in NASL, whose form has been the catalyst for the massive turnaround for the Eddies.

And how did their head-to-head battle look? Well, Ramirez missed a sitter. And Laing, sporting a new dyed-orange hairdo, converted a shot from distance with his less-than-preferred right foot. Laing’s effort turned out to be the winning goal in a 2-1 FCE triumph. The Eddies have now won three in a row, and are just three points out of fourth overall in NASL (and a playoff spot). Plus, the Eddies are just five points behind San Antonio in the fall season standings.

The Eddies are the hottest team in NASL.

That’s right. The Eddies are the hottest team in NASL.

And the win against the NASL spring champions didn’t see the Eddies play consistently well. In fact, had the Eddies been down two goals to the Loons at halftime, the home side couldn’t have complained. But Lady Luck, who has conspired against the Eddies for much of the season, decided to work for Edmonton, instead.

In fact, the Eddies should have been down a goal within the first 10 minutes. Fullback Kareem Moses laid a dreadful back-pass attempt in no man’s land. Ramirez pounced on it, rounded FCE keeper Lance Parker and… put his shot into the side netting. Bullet dodged. Crisis averted.

Later in the half, Minnesota fullback Justin Davis made an inspired run into the box, had Parker at his mercy and crashed his volley off the crossbar.

And Ramirez forced Parker to make a leaping fingertip save before halftime.

Time after time throughout the first half, the Eddies’ back four were guilty of making soft passes into the midfield, and turning the ball over. At halftime, FCE coach Colin Miller spoke about how disappointed he was by his team’s effort.

“It looks like some of our players are looking for a contract with Minnesota, the way they’re giving the ball away,” he said. And Miller said he didn’t understand why the Eddies were trying to play so many short passes out of the back when they were playing the first half in the teeth of a 25 km/h wind.

The Loons kept coming in the second half; in the 56th minute, Juliano sprayed a shot just wide of the post.

But, the game changed when FCE was forced to put in teenager Hanson Boakai for the injured Michael Nonni. In the 65th, just minutes after coming on, Boakai picked out a pass the split the Minnesota defence. It ended on the foot of Tomi Ameobi, who did well to hold up play in the Minnesota penalty area, waiting for reinforcements to arrive. He tried to play the ball across the box, it was deflected, and right to Chad Burt, who side-footed the ball into the goal.

And, if the deflected cross and Minnesota’s lack of finishing prowess weren’t enough to prove that Lady Luck had changed her mind on how she feels about Edmonton, the second goal was kinda like a Seventh Sign.

FCE’s Boakai had lost the ball, but Minnesota’s clearing attempt clanged off the referee and went right back to Boakai. The ball finally came out to the left wing, where Laing collected it, stepped inside and hit it with his right foot.

And the ball flew into the top of the Minnesota goal. After 70 minutes, the Eddies had a 2-0 lead.

Daniel Mendes got one back with a rip-roaring free kick from just outside the area. And he had the chance to tie the game with another free kick from the same spot. But, on his second attempt, Parker was able to get across the goal line and make the save. The Eddies ticked down a nervous final couple of minutes, and could celebrate yet another win.

“I said before the game that I don’t care how we play as we get the three points,” said Miller. “It (beating Minnesota) makes a statement.”

If FCE can go to San Antonio next week, a team it beat handily in Edmonton earlier this fall season, and win its fourth league game in a row, the standings will only get tighter. With a win next week, the worst the Eddies can be is three points out of the fall season lead (depending on how Minnesota does next week).

That’s an incredible turnaround for this team.