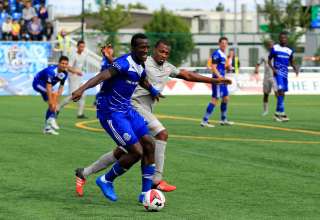 • FCE winger Sainey Nyassi was sent off late in the second half for an alleged stomp/punch on Puerto Rico defender Ramon Soria. The defender got up and finished the game — but was seen leaving Clarke Field on crutches.

• And, as referee Yusri Rudolf blew the final whistle, PRFC midfielder Chris Nurse — a former Eddie — had to be restrained by back-up keeper David Meves as he was incensed with both the referee and FCE defender Pape Diakite. Eventually, PRFC coach Adrian Whitbread had to demand that Nurse leave the field of play. Nurse later tweeted with a claim that an FC Edmonton player had uttered a racial slur in Spanish.

Nurse claimed that FCE midfielder Nico Di Biase had made a racist comment in Spanish during the game — at the time Nyassi was sent off. Nurse said that he tried to bring it to the attention of team captan Albert Watson and Diakite.

(UPDATE: As of Sunday evening, FC Edmonton has stated that the club does not have a comment on these allegations.)

On a cool early autumn day in Edmonton (13 C at kickoff), with the trees across from Clarke Field already showing their bright fall colours, the Eddies simply couldn’t break down a Puerto Rico team that looked determined to play for a draw.

How negative was the road side? Even when PRFC was up a man, the players opted for a clock-killing strategy. Late in the game, up a player, the visitors chose to take the ball into the corner and kill time rather than try to create scoring chances.

“It was just a good, old-fashioned battle between two teams,” said Whitbread, who thought the draw was a fair result.

The Eddies have not given up a goal in 534 minutes of NASL action. But their home winning streak was snapped at nine, one short of the league record. The Eddies and New York Cosmos are tied at top of the NASL fall standings; the Cosmos have the better goal differential, but the Eddies have a game in hand.

Miller said that he didn’t think Nyassi’s sending off cost the Eddies a chance to win the game — he said that, throughout the game, the quality of balls in the final third weren’t good enough. He said that crosses were missing their targets.

“One team was proactive, and the other team was playing for a draw,” said Miller.

But Miller said he wasn’t sure why Nyassi was sent off.

“Sainey couldn’t tackle a fish supper,” said the coach — who couldn’t believe Nyassi could have maliciously taken out Soria. He added that he thought Soria could have been called for a foul on Nyassi.

The replays showed that, away from the ball, the two players shoved each other. Then, Nyassi went for a run and the players’ legs came together. Soria went down — which suggested that Nyassi had stepped on his foot.

Miller said that he would review the game video. And, if he feels that Rudolf erred, he said “I am going to take this to the CSA.”

The Canadian Soccer Association assigns all the refs for NASL games in Ottawa and Edmonton.

Miller said that “we have got to raise the bar” in all aspects of the game, and that includes officiating. “And that’s true of all of North America.”

The Eddies are disappointed that they didn’t re-take sole possession of first place. But left back Adam Eckersley said that how the team bounces back this Friday in Ottawa will say a lot about the side. He said that a championship-calibre team won’t allow one hiccup to derail what’s been a great run.

“You have games like this in a season, you’re disappointed because it’s a game you should have won. But you pick yourself up and dust yourself off.”