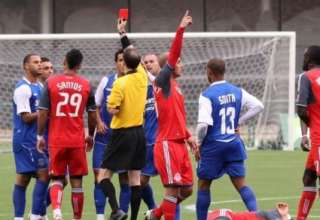 Shaun Saiko, FC Edmonton’s midfield general, came in with a late tackle on the wet turf at Commonwealth Stadium just 23 minutes into the first leg of the semifinal. Toronto FC’s Oscar Cordon went down in pain — and referee Paul Ward reached for his red card.

Toronto FC, the defending NCC champions, then pulled away from the lower-tier NASL expansion side, winning 3-0, making the return leg at BMO Field nothing more than a formality.

Even though TFC coach Aron Winter rested many regulars ahead of Saturday’s MLS date in Seattle, it was two members of the normal starting XI who did the damage. Maicon Santos scored twice, while Alan Gordon scored the other.

From the press box, right back Richard Eckersley, the new arrival from Burnley, looked calm and confident in 45 minutes of work. And 2011 draft pick Joao Plata was the provider for two of the goals and constantly troubled the FC Edmonton backline.

But Winter, despite the result, lambasted his club in the post-game media conference. He said the team gave away possession too easily, let a shorthanded FC Edmonton off the hook too often, and didn’t do enough with the ball.

“The result was good, but the way we played was not good.”

After the red card, FC Edmonton actually enjoyed about a 10-minute spell of dominance, but couldn’t translate it into a goal. Alex Surprenant tried a free kick from 30 yards out that caught TFC keeper Stefan Frei napping, but sailed just wide of the post. Trinidad and Tobago international Conrad Smith had a couple of decent looks at goal, the best coming from a deft cross from Kyle Porter, making his first start for FC Edmonton after being signed late last week.

Porter, the former Vancouver Whitecap, looked quick and lively, and gave TFC defender Ty Harden all he could handle in the first half.

But Santos, after scuffing a chance in front of goal earlier in the half, had an easy time finishing after a pass from Plata got through FCE defender Paul Hamilton. The ball came right to Santos, deep in the penalty area, and he slid it in. Hamilton made an error leaving Santos to try and pick off the pass. Once it got by him, Santos was left unmarked. And Hamilton’s miserable first half continued when he was kicked in the head by Gordon.

Toronto FC put the game out of sight with two more goals early in the second half, Plata once again the provider on a goal from Gordon. Plata played a clever ball through, Gordon’s first shot was stopped, but then he had a yawning cage to find after Cordon’s second attempt fell to him.

Then, Santos picked off a terrible miskick from FCE keeper Rein Baart, marched in alone and slotted a finish in the corner.

As for the game-changing challenge, Cordon said Saiko deserved the red.

“Both of my feet were behind me, and he (Saiko) came in with studs up. I wasn’t trying to hurt him.”

Sinkgraven said the challenge deserved a yellow, but Saiko should never have flown in with the ball on the TFC side of half. It was the time for discretion, not aggression. “It wasn’t a smart tackle.”

“Both of them (Cordon and Saiko) went down in the tackle,” said Surprenant. “For me? Not a red card.”

The match was played in front of 5,781 spectators, which looked like a smattering of people in the 50,000-seat plus Commonwealth Stadium, but would be well over capacity in FC Edmonton’s regular NASL home, Foote Field.

“The next Nutrilite game here, there will be more,” said FCE owner Tom Fath.

“In the future, we hope we can play with Toronto,” said Baart.