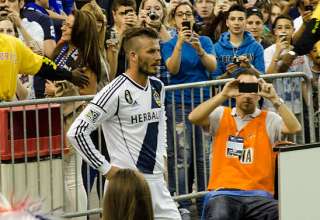 Through the first 20 minutes of Wednesday’s CONCACAF Champions League quarter-final first leg, it seemed like Toronto FC was having the ultimate storybook performance. Playing in the biggest match (and in front of the biggest home crowd) in club history, the Reds jumped out to a 2-0 lead over the favoured Los Angeles Galaxy, driving the 47,658 supporters in attendance into even more of a frenzy.

Unfortunately for the Reds, however, there was no happy ending. Landon Donovan’s goal in the 88th minute equalized the score at 2-2 and cost TFC a chance to get an edge in the CCL tie.

“The city definitely delivered tonight and they felt like a 12th man,” said midfielder Terry Dunfield. “It’s too bad, the script was waiting for us to hold on and take that 2-1 score to L.A.”

Playing indoors at the Rogers Centre due to concerns about the early-March weather conditions in Toronto, the switch of venue and the game’s importance combined to create a truly spectacular setting for not only TFC, but for Canadian soccer as a whole. The crowd kept up the chants, cheers (and jeers, as far as the Galaxy players were concerned) and streamer-tossing for the duration of the match.

This atmosphere fuelled TFC’s quick start, led by the two hottest players of their preseason. In the 12th minute, a Torsten Frings corner attempt was tipped and fell to Ryan Johnson, on the left side of the net. Johnson chipped it in for his fourth goal in as many games, counting both the TFC preseason matches and international games for his native Jamaica.

That opening goal drew a tremendous reaction from the fans that got even louder nine minutes later when Luis Silva made it 2-0 for the home side. It was Frings again as the catalyst, this time sending a long bomb of a pass from midfield that found Silva in front of the net. The rookie midfielder met the ball perfectly and sent a header just inside the right post.

“I saw the goal going out to Torsten, and as soon as I saw that I tried to run behind the defender,” Silva said. “He gave me a great delivery and I just had to head it in.”

The goal punctuated an impressive debut for Silva, Toronto’s first-round pick (fourth overall) in the 2012 MLS SuperDraft. After scoring four goals in the preseason, the 23-year-old L.A. native carried his scoring touch in his first professional match, against his favourite team as a child, no less.

“It’s really emotional for me, I’m really excited,” Silva said. “I’m blessed that I got a goal and we’re going away with a tie….All these people came to watch us. I’ve never played in front of a crowd like that, it’s really beautiful for me.”

After that initial 20 minutes, however, the Galaxy players collected themselves and regained the form that has won them two straight MLS Supporters’ Shields and last year’s MLS Cup. Mike Magee put his team on the board with a goal in the 29th minute and Los Angeles went on to more or less dominate the rest of the first half.

Toronto, who began the game in a 3-4-3 formation with Frings as the sweeper between Ty Harden and Miguel Aceval, shifted back into a more conventional 4-3-3 as the half progressed. By the second half, it seemed more like a 5-3-2 as the TFC back line struggled to hang on against the powerful L.A. lineup.

Robbie Keane nearly tied the score in the 61st when he received a through ball down the left side and sent a cross into the box, just pass a streaking Donovan who came in late. A few minutes later, Edson Buddle nearly scored on a quick shot that required TFC goalkeeper Stefan Frei to leap in order to knock it aside.

While L.A. had more chances overall, however, the Reds had a close call of their own in the 68th minute. With Galaxy goalkeeper Josh Saunders blocked, Silva had an open net and the ball at his feet. Before he could shoot, however, David Beckham got in front of him and deflected Silva’s attempt over the bar.

Beckham, as one would expect, heard boos from the partisan Toronto crowd every time he touched the ball. Beckham also experienced a constant shower of streamers (just like the old days at BMO Field) every time he lined up to try a corner kick.

It was all fun and games until Beckham lined up for a corner in the 88th minute and was hit by what appeared to be a beer can thrown from the stands. Perhaps karma stepped in at that point, as Beckham’s corner bounced around the box until it found Donovan’s foot, and the American international buried it for the goal that broke the supporters’ hearts.

As per usual in a CONCACAF game, there were a few questionable calls and non-calls from the officials. TFC coach Aron Winter said he was trying to make a substitution before the corner kick, but the official wouldn’t stop play so the Reds could get a new man onto the field. (Aaron Maund came on for Silva moments after the goal was scored.)

Also in the second half, Saunders came to the edge of the box to claim the ball, colliding with Danny Koevermans and causing a shoving match on the field. A play that could well have been a penalty kick for the Reds ended with Koevermans receiving a yellow card and Saunders escaping unpenalized, despite Koevermans showing off the marks on his leg where Saunders allegedly spiked him.

The result gives the Galaxy a decided advantage heading into the second leg of the CCL quarter-final tie, to be played on Wednesday, March 14 at the Home Depot Center. Not only will the Galaxy be playing at home, their two away goals will likely be enough to give them the edge in any sort of tiebreaker situation.

“Going back to L.A., we’re in a decent position,” said Galaxy coach Bruce Arena. “It’s not perfect, but it’s not bad.”

Arena was also not complimentary about the Rogers Centre’s artificial turf surface, calling it “a little bit dangerous” and claiming the field should have been watered down to prevent fewer slips and falls.

“We understand all the reasons it happened like this,” Arena said, referring to the concerns about the Toronto weather. “It’s nobody’s fault…[but] this sport isn’t made to be played indoors on an artificial field.”

Toronto FC will have to beat Los Angeles outright in order to advance to the CCL semis. The Reds have a respectable record against the Galaxy at their home pitch (1-2-2) and also caught a break in scheduling — while TFC has the week off, the Galaxy opens the MLS season in an important game against Real Salt Lake on Saturday.