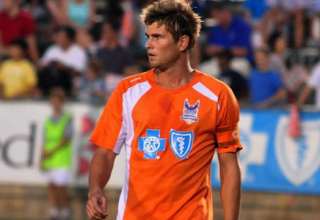 The pipeline between Cary, N.C. and Vancouver continues to flow.

Rusin left Rennie’s RailHawks team midway during the 2011 season. After he left, the first-place RailHawks suffered a severe dip in form, which culminated with the championship favourites crashing out of the playoffs.

After the RailHawks’ 2011 season was over, Rennie completed his move to Vancouver, bring Watson and Knighton with him. Davidson played for Rennie as a RailHawk earlier in his career. And Rennie then made a deal with Montreal to acquire the MLS rights of Etienne Barbara. The NASL MVP was signed by the Whitecaps, but was the biggest bust of the RailHawks bunch. Injuries curtailed his season and he barely ever got into the ‘Caps lineup. He was cut at the end of the year, then signed a letter of intent to come back to NASL with FC Edmonton. But, after some personal issues arose for Barbara, the Edmonton deal was aborted.

But, as much as some blame the RailHawks’ 2011 crash on the fact that it was announced halfway through the season that Rennie was going to leave the club for the Whitecaps at the end of the campaign, it needs to be made clear that Rusin’s departure to Danish side HB Koge weakened the Carolina back end. Rusin spent the last season and a half in Denmark.

“Brad is a very powerful, athletic player who can play a couple of different positions,” said Rennie in a release issued by the Whitecaps. “He did very well in Denmark and had a lot of interest from clubs in Europe and other clubs in MLS. We are pleased that we’ve got him and think that he can be an important player for us right away, but also for the long term.”

Davidson had some good spells in the Whitecaps midfield. By the end of the season, you could argue that Watson had become the team’s best midfielder. And Knighton won the starting keeper job away from Joe Cannon. With Rusin’s arrival, will another RailHawk stir up the Whitecaps?

For the second season in a row, the Whitecaps will travel to Cary for a preseason friendly against the RailHawks. The teams will meet Feb. 24.

With the core of the team stripped by the Whitecaps, the RailHawks struggled in 2012 — and gave up the most goals in NASL. The lowlight was an 8-0 loss to San Antonio.