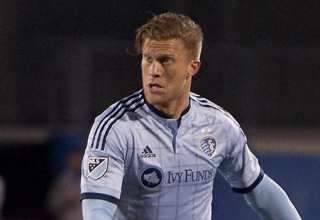 Four Canadian players made their MLS season debuts (or MLS debuts, period) in the third weekend of the MLS season. That boosts the number of Canadians who have played in the league so far in 2015 to 12.

But, take that with a grain of salt. The two strong leaders in minutes played by Canadians may never ever suit up for the Canadian national side — Philadelphia Union defender Steven Vitoria and FC Dallas striker Tesho Akindele, who scored this past weekend. Because there is still more than a snowball’s chance in hell that either could play for Canada down the road, they are included in the list.

And five of the remaining 10 have seen nothing more than substitute minutes.

But it is encouraging to see Marcel de Jong get his second straight start (and full 90) for Sporting Kansas City, which puts him in the minute lead for Canadian players who actually have senior national-team caps. And Toronto FC had a bye week, so take the Reds’ numbers with a grain of salt.

MLS. NASL. NWSL. GOOD FOR CANADA? WE ASK THE QUESTION IN PLASTIC PITCH #5. NOW AVAILABLE FOR APPLE and ANDROID DEVICES.